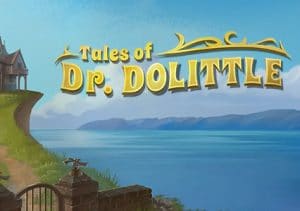 WHERE TO PLAY Tales of Dr Dolittle SLOT

Talk to the animals and try and conjure up a jackpot in Tales of Dr Dolittle. Created by Quickspin, it’s a terrific looking 5 reel, 25 payline video slot that comes with streak respins, multiplier wilds of up to 5x and a free spins feature where a multiplier wild will hit on each of them. Play on your PC, tablet or mobile from between 25p and £100 per spin.

There are few better developers than Quickspin when it comes to design and Tales of Dr Dolittle is suitably easy on the eye. The reels are set against a coastal backdrop. You’ll also see Dr. Dolittle’s mansion and a Victorian-era airship. It’s all very nicely done.

On the reels are lower value A to J royal symbols alongside a dog in a bow tie, a horse wearing a pair of specs and a parrot in a monocle. Dr Dolittle is the best symbol, paying 2 times your bet if you land 5 on a payline. That’s not much for a top paying symbol we hear you say. True. There are plenty of ways to boost those amounts those, starting with the multiplier wilds.

Land a winner that contains 1, 2, 3 or 4 wilds and the payout is boosted by a multiplier of 2x, 3x 4x or 5x – this is known as the Multiplier Wild feature.

Every time you land a winner the successful symbols lock in position and a respin follows – the Respin feature. These streak respins keep on coming as long as a new matching symbol or wild joins the original winning combination. Get on a roll here and some big results are possible.

Landing 3 bonus symbols on the same spin triggers the Free Spins Bonus feature – on offer here are 10 free spins. On each of them, you’re guaranteed to see a multiplier wild which can soon get the cashier moving as a 5x multiplier can potential land on every free spin.

There’s plenty to like about Tales of Dr Dolittle. The crystal-clear visuals are super sharp and the bouncy backing track fits the theme rather well. We enjoyed the extras here too. The streak respins come along regularly and deliver plenty of action, as do the multiplier wilds. Throw in a free spins round with those goodies and Tale of Dr Dolittle becomes a very playable option.

Saying that, the variance is low with a top payout of just 250 times your bet per spin/respin/free spin – Quickspin’s Tiger’s Glory is much more interesting as you can win 13,830 times your bet on every free spin!