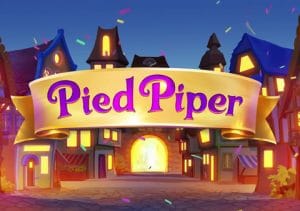 WHERE TO PLAY Pied Piper SLOT

The Pied Piper led the rats of Hamelin on a merry dance but can he lead you to a jackpot? That’s the goal in this 5 reel, 40 payline video slot that’s based on the famous German folk tale. Superbly designed, it comes with re-spins with stacked walking wilds and a free spins feature. Stakes range from between 20p and £100 per spin.

There’s usually very little cause for grumble when assessing the design of Quickspin games and Pied Piper is another cracker on that score. Set against a medieval street scene, the reels include lower value A to 10 symbols, a key, a purse full of gold coins, a princess, a queen and a king.

His majesty, who is sporting facial hair the dandiest hipster in Shoreditch would approve of, is the top payer. Land 5 of his majesty on a payline and you’ll pocket an award equal to 10 times your total stake. Helping to create winning combinations is the mouse which is the standard wild – it substitutes for everything apart from the bonus and offers payouts up to 20 times your total stake per payline.

The Pied Piper himself is the game’s second wild – he spins in a 4-high formation on reels 3, 4 and 5 only. If you land a full stack of the Piper, you’ll trigger the Piper Respins feature. The stacked wild, plus any standard mouse wilds that are also on the screen, shift 1 reel to the left on each respin until the Pied Piper drops off the reels.

If he makes a surprise re-appearance on reel 5, you’ll get another round of 5 respins, complete with the walking stacked wilds. This is called the Mystery Re-trigger feature.

Pied Piper also comes with a Free Spins feature which is triggered by landing 3 scatter symbols on the same spin. You can then look forward to 10 free spins – on each free spin, between 1 and 6 standard mouse wilds are added. You can activate the Mystery Respins Trigger feature which sees a Piper Wild appearing after a free spin – this triggers the Piper Respins feature which then gives you respins with shifting wilds.

This is another impressive all-round performer from Quickspin. The sound and visuals are as high-end as we’ve come to expect and there are some interesting extras on offer on the gameplay front. We didn’t land the features all that often but the extra wilds can make a big impact when they do arrive. The variance is in the medium, verging on the high range – you can win an impressive 1,456 times your total bet on each spin/free spin/respin.

Quickspin has made a good stab at updating a very old story. Well designed and offering some innovative bonuses, Pied Piper led us on a very merry dance. I would also recommend you take a look at some of their other games with Sticky Bandits and Spinions Beach Party the better ones