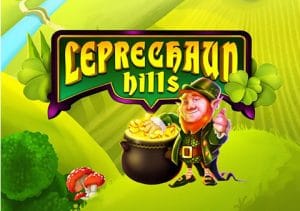 WHERE TO PLAY Leprechaun Hills SLOT

Join a mischievous sprite on a quest for gold at the end of the rainbow in Leprechaun Hills. Powered by Quickspin, it’s a 5 reel, 40 payline video slot that comes with re-spins and a free spins feature complete with transforming symbols. Play on tablet, mobile and of course, desktop devices from between 40p and £80 per spin.

The design in Leprechaun Hills has a typically light-hearted feel – set against a backdrop of rolling green hills, the reels are packed full of the usual assortment of Irish clichés. Joining the lower value playing card values are magic toadstools, lucky 4-leaf clovers, glasses of Guinness and the cheeky leprechaun. The Leprechaun Hills logo is the wild – it replaces all other symbols bar the bonus scatter.

Land a winning combination that includes the toadstool, Guinness, clover or leprechaun and you can look forward to the Lucky Respins feature – on that respin, giant stacked of the triggering symbol are added to reels, boosting your chances of landing a decent winner.

Land 3 or more of the bonus symbol (the pot full of gold coins) and you’ll trigger the Rainbow Free Spins feature where you’ll be given 7 free spins. Look out here for the special mystery symbols – these will magically transform into the same matching symbol (toadstool, Guinness, clover or Leprechaun). There’s a 50% chance that this transformation will create the best possible symbol and the biggest potential winning combination.

A feature that only offers 7 free spins doesn’t sound especially appealing – if the transformations work their magic, there is the scope to land some big winning combinations here. The feature doesn’t hit too often but can certainly pack a punch when it does.

The Lucky Respins feature is none too shabby either. Landing stacked symbols on multiple reels can quickly get the coins flowing. There are wins of over 1,200 times your bet on each spin so it can be highly lucrative if your luck is in.

Irish luck is 1 of the most popular themes with both slots players and developers – Leprechaun Hills is a tidy addition to that already crowded feel. The bright, cartoon visuals combined with the pair of potentially big-hitting features make for an impressive overall package. If you enjoy celebrating the luck of the Irish, there are plenty of other games to play with the iconic Rainbow Riches by Barcrest a must.