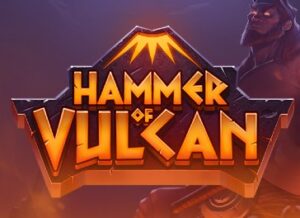 WHERE TO PLAY Hammer of Vulcan SLOT

Join the Roman God of Fire in his forge in the bowels of Mount Etna in the Hammer of Vulcan slot, a volatile slice of ancient myth and legend from Quickspin. Highlights here include Hammer Strike wilds. When these hit, all the symbols directly below also turn wild and a payout calculation follows. Trigger the Light the Forge Free Spins feature and you can look forward to free spins. The Hammer Strike wilds are in play too. They have even more powers as they increase a multiplier by 1x whenever they land. Find out more about this super volatile slot that offers maximum wins of 20,347 x your bet in our in-depth Hammer of Vulcan review. 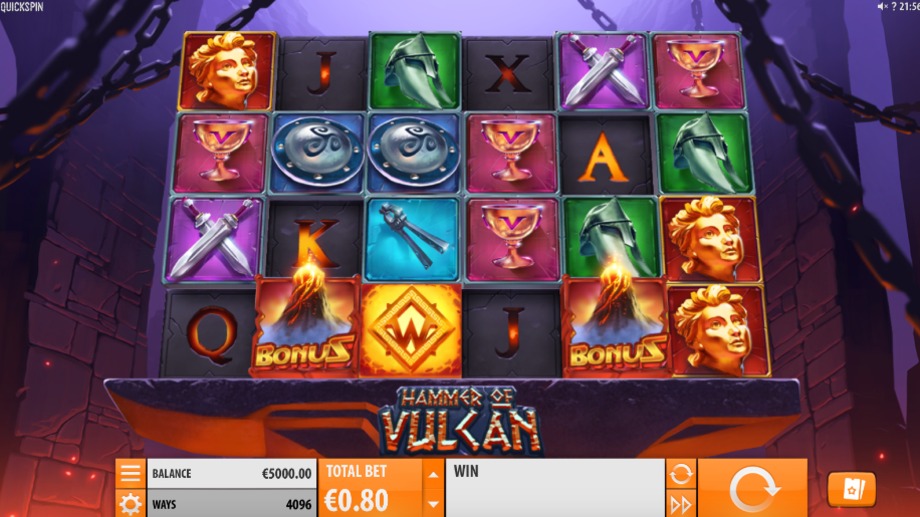 The design in the Hammer of Vulcan slot is superb. The reels are set within Vulcan’s metalworking forge, deep inside Mount Etna. Vulcan is the God of Fire from Greek mythology.

High spec design has become a given for slots from Quickspin and Hammer of Vulcan doesn’t disappoint. The comic-book style imagery is superbly executed and the on-screen action is accompanied by a sweeping soundtrack that creates loads of atmosphere. It’s another A grade for the design of a Quickspin slot.

Joining the stone A to 10 symbols on the reels are tongs, a shield, a helmet, swords and a chalice. The golden Golem tops the payouts when it comes to the standard symbols. You’ll pocket 2, 4.5, 6 or 12 x your bet if you land 3, 4, 5 or 6 on adjoining reels on the same spin.

The wild pays the same as the golden Golem. Vulcan with his hammer is the Hammer Wild. This also replaces all the standard symbols and also activates the Hammer Wild feature. We’ll take a closer look at this shortly. The other symbol is the volcano. This is the bonus scatter. Landing 3 or more of these triggers the free spins round, which we’ll also look at in detail below.

Quickspin has created a fully optimised Hammer of Vulcan mobile slot. The design here is just as good as in the desktop version. It comes with the same high variance gameplay too.

The Hammer of Vulcan slot has 6 reels and 4,096 ways to win. You need 3 or more identical symbols appearing from left to right (and starting from reel 1) to give you a winning outcome.

You can play Hammer of Vulcan at bet levels of between 10p and £100 per spin. Autoplay is available if required too. You can run up to 1,000 autospins and set win and loss stop limits to suit. There’s also a quickspin mode.

The Hammer of Vulcan RTP of 95.81% is a little below average. As you might expect from a slot based on the God of Fire, Hammer of Vulcan is volatile. The variance here is 5 out 5 so proceed with caution. This slot can pack a hefty payout punch though. The maximum win is a massive 20,347 x your total bet.

The Hammer of Vulcan slot doesn’t come with an enormous collection of bonus features. Look out though for Hammer Strikes which can turn multiple symbols wild as well as a free spins feature complete with an expanding multiplier.

The Hammer Wild can appear on all 6 reels on any spin. When the Hammer Wild lands, all the symbols directly below it also turn wild. A payout consideration follows with the extra wilds in position.

Land multiple Hammer Wilds on the same spin and the coins can quickly flow. That’s certainly true during the free spins where the Hammer Wilds developer even more magical properties. 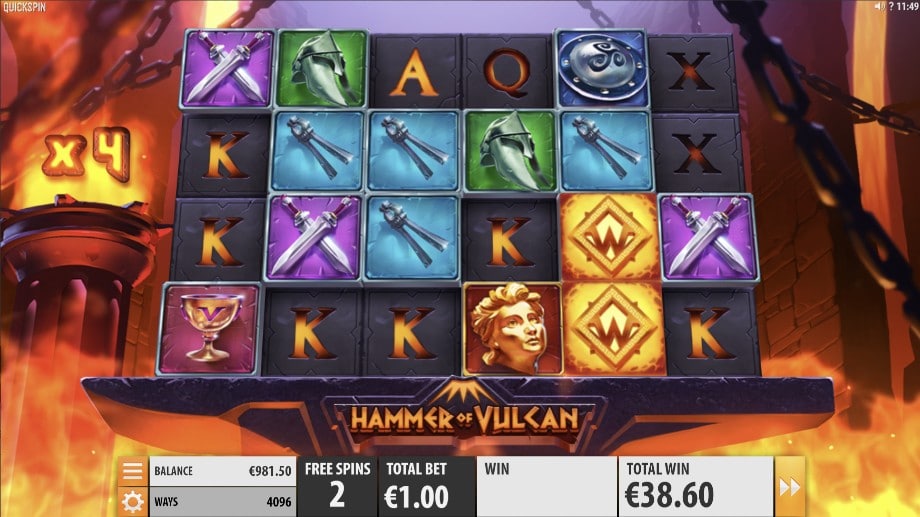 To activate the Light the Forge Free Spins feature, land 3 or more volcano scatter symbols anywhere on the reels on the same spin. The more scatters, the more free spins:

The free spins start with standard 1x multiplier. The Hammer Wild can quickly change that though. Each time a Hammer Wild lands, the multiplier increases by 1x. This multiplier boost comes in addition to the usual expanding wild properties that can make the Wild Hammer symbol so powerful.

Each time a volcano scatter appears, extra free spins are added to your total.

Don’t despair if you miss out on landing a winner with your final free spin. If that happens, you’ll bring the Strike Again feature into play. Respins are awarded until you do land a winner.

There’s a Buy feature option available to players in some but not all territories. For a fee of 80 x your bet, you’ll get a spin with between 3 or 6 scatters which award a random allocation of between 10 and 20 free spins.

Top spec design and straightforward, high variance gameplay are the usual recipe for a Quickspin release. That’s precisely what you’ll find in the Hammer of Vulcan slot. The sound and visuals here are from the top drawer and the gameplay, though not very complicated or massively original, keeps things moving nicely.

This is a volatile slot, so take care. It can be risky for your bankroll but get lucky during the free spins and the God of Fire could unleash a torrent of coins. If you enjoy high variance slots packed full of visual flair, have a go at the Hammer of Vulcan.

Fancy some fiery volcanic wins? Try your luck with the Gold Volcano slot by Play ‘n GO which offers 10,000 x bet payouts on each spin.

What is the Hammer of Vulcan RTP?

The Hammer of Vulcan return to player rate is 95.81% which is a little below average but not massively so. The variance, and win potential, is sky high though.

What is the Hammer of Vulcan max win?

The maximum win is 20,347 x your total bet per spin. This can be won in the Light the Forge Free Spins feature where the Hammer Wild increases the multiplier each time it appears.

Is there a Hammer of Vulcan free spins round?

Yes, the Light the Forge Free Spins feature offers up to 20 free spins initially. Hammer Wilds expand to turn symbols directly below wild, just like in the base game. They also increase a multiplier by 1 whenever they appear. There’s also unlimited more free spins to be won.

How does the Hammer Strike feature work?

In the Hammer Strike feature, all symbols below a Hammer Wild symbol become wild. In the free spins, they also increase the multiplier each time they appear.