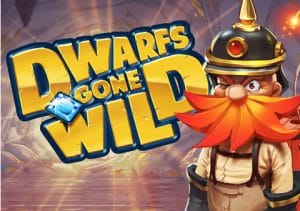 Join Snow White and her vertically challenged chums and go digging for treasure in Dwarfs Gone Wild. This updated version of the classic fairy tale is from Quickspin and is played using a 5 reel, 20 payline game engine. Boasting superb design, it comes with respins where 300 extra top paying symbols are added to the reels and a free spins round complete with plenty of wild and multiplier extras. Stakes range from between 20p and £100 per spin.

There are few better developers than Quickspin when it comes to design and Dwarfs Gone Wild maintains the usual impeccable standards. The setting is a mineshaft. On the reels are A, K and Q values plus the 7 dwarfs. You won’t see Sneezy, Bashful, Doc of the traditional crew though. The dwarfs here are Banker, Bomber, Racer, Huntsman, Blacksmith, Wizard and Strongman.

Each time you create a winner made up of a dwarf, it’s collected in a meter. Once the meter is full, you’ll be awarded a Golden Minecart. There are 7 of these to collect. These become important in the Golden Minecraft Free Spins Bonus feature.

Snow White is the most lucrative symbol. Land 3, 4 or 5 of her in combination and your reward will be 2, 15 or 60 times your total bet. Those same amounts are on offer from the Dwarfs Gone Wild logo which is the wild. The game comes with plenty of bonus features:

Magic Mirror feature – whenever Snow White lands anywhere on the middle reel, you’ll be awarded 2 respins. 300 extras Snow White symbols are added to the reels during those 2 respins to boost your chances of landing a high value win.

We found plenty to enjoy in Dwarfs Gone Wild. The 3D visuals and animations are superbly done and as good as you’ll find anywhere. The Golden Minecraft Free Spins Bonus feature offers plenty of potential too (up to 2,535 times your stake per free spin) thanks to the wild extras and multiplier possibilities. As far as volatility goes, Dwarfs Gone Wild is in the medium to high range. You might have to wait a while to trigger the main feature but if can be worth the wait.

The fairytale theme isn’t usually one of our favourites – Dwarfs Gone Wild won us over though. If you like high class design and funky free spins, then you won’t go too far wrong here. I strongly suggest you take a look at other Quickspin titles like Pirate’s Charm and Volcano Riches.