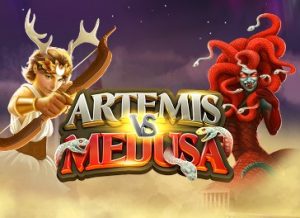 WHERE TO PLAY Artemis vs Medusa SLOT

A Greek goddess goes into battle against a horde of mythical monsters in the Artemis vs Medusa slot. Created by Quickspin, this ancient legend-themed slot is played using a 5 reel, 1,024 ways to win game engine. Gameplay highlights include monster bounty bonuses which are triggered by landing special coin and Artemis symbols on the same spin. There’s also an Unlimited Battle Free Spins feature where Artemis battles the monsters in an unlimited series of free spins which continue until either the monster or Artemis emerges victorious. Has the epic theme delivered an epic slot? Find out in our detailed Artemis vs Medusa review. One area where Quickspin slots usually excel is in their design and the Artemis vs Medusa slot more than ticks that box. It’s easily one of the best-looking games you’ll ever come across.

With a Greek mythology theme, there’s an antiquated look to the visuals which fits in nicely with the classical age theme. It’s a similar story with the sweeping orchestral backing track which again, matches the genre perfectly well.

Watched over by a pair of Spartan soldier statues, the reels are set against a mountainous backdrop which adds to the grandness. You’ll find lower value gemstone symbols as well as the more rewarding creature symbols: Harpy, Minotaur, Griffin and Gorgon. The best of the standard symbols if the golden goddess Artemis. Land 3, 4 or 5 of these on adjoining reels and you’ll pocket an award of 2, 8 or 25 x your total bet.

The golden antler is the wild. This doesn’t offer any payouts but it does replace all the standard symbols when it makes up part of a winning combination.

Artemis v. Medusa is available to play on all devices including desktop, tablet and mobile. The Artemis vs Medusa mobile slot is better than most mobile games as there’s a Portrait Mode option where the reels take up more of your smartphone screen. The visuals deliver the same classy design and volatile gameplay as the bigger screen version.

The Artemis vs Medusa slot game uses a 5 reel, 4 row machine which offers 1,024 ways to create a winning combination. To hit a winner, you’ll need to land 3 or more matching symbols or wilds on adjacent reels, starting from reel 1.

Bet levels range from between 20p and £100 per spin. Click on the arrows next to the spin button to set up autoplay mode. You can run between 10 and 1,000 autospins. Click the tab below that for turbo mode. You can set detailed win and loss limits here.

The Artemis vs Medusa RTP is a steady 96.17%. The volatility here is in the medium to high bracket with most wins coming in the base game. The bigger wins will come in the free spins. The maximum payout is 5,288 x your total bet per spin or free spin.

The gameplay in the Artemis vs Medusa slot is a little unusual. There are special bonus prizes up for grabs if you land special coin and Artemis symbols as well as a free spins round where battles determine how many games you’ll play.

Each of the Harpy, Minotaur, Griffin and Gorgon symbols can come with a coin attached. Hope to see an Artemis symbol appear in a gold-edged position on reel 5. The monster coins are collected and deliver special bonus prizes.

The value of these special bonus coins varies depending on the monster to which they were attached and how many coins were on display. The best of the bounties belongs to Medusa. Each one of these awards a bonus of 15 x your bet. Others pay 2x, 4x or 8x your bet. To trigger the Unlimited Battle Free Spins feature, you’ll need to land the 3 bow and arrow bonus symbols on the same spin. You’ll then head to a new screen where you’ll play out an unlimited number of free spins.

This number is determined by a series of battles. Each time an Artemis symbol lands, all the accompanying monster symbols are added to a meter. One monster, starting with the lowest value is removed from the meter when Artemis lands and a special bounty prize is awarded.

The round continues until the meter reaches 15 or Artemis defeats the final monster. This can give you plenty of free spins.

We normally recommend giving a slot a spin in demo mode before risking your cash. That’s definitely the case with the Artemis vs Medusa slot as its different to other slot games. The battle element of the free spins round is quite complicated and landing it in play mode should give you a better idea of what to expect. Once we triggered it multiple times, we soon got the hang of it.

The main takeaway is that this slice of myth and legend is a volatile one. We weren’t bowled over by the features but the bounty bonuses and the free spins can deliver some very decent action.

If you can’t get enough of all thing ancient, Artemis vs Medusa is a battle you won’t want to miss. However, there are lots of other Greek mythology slots to choose from as it’s one of the most popular themes. Playtech’s Age of the Gods and NextGen Gaming’s Medusa Megaways are 2 worth trying your luck at.

What is the Artemis vs Medusa RTP?

The Artemis vs Medusa return to player rate is a decent 96.17%. With most wins coming in the base game, the bigger wins will come from the free spins. It’s a medium to high variance slot so expect smaller wins most of the time.

What is the Artemis vs Medusa maximum win?

The most you can win from a single spin in Artemis vs Medusa is 5,288 x your total bet. This can be won on a base game spin as well as a free spin. Your chances increase in the Unlimited Battle Free Spins feature though.

Is there an Artemis vs Medusa free spins feature?

Yes, trigger the Unlimited Battle Free Spins feature by landing 3 or more scatters on the same spin. The number of free spins awarded depends on the outcome of a series of battles between the Greek goddess and her monster opponents. You can also win special bounty prizes here.

Can you play Artemis vs Medusa on your mobile device?

Yes. Quickspin produces all slots with HTML5 technology meaning it can be played on mobile, tablet and desktop devices. The difference with Artemis vs Medusa is that there’s a Portrait Mode meaning the reels occupy more of your smartphone screen for a better playing experience.