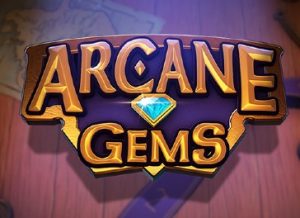 WHERE TO PLAY Arcane Gems SLOT

Open up a jewellery box and see if there are treasures waiting inside in the blingtastic Arcane Gems slot. This 5 reel, 9 payline game has been created by Quickspin and comes with the developer’s usual design flair. As you’ll discover in our detailed Arcane Gems review, the gameplay revolves around the Arcane Lock feature which is a variation on the streak respin. After a winner lands, the symbols are held and a respin follows. The big tweak here is the multipliers that come into play when you fill a whole reel with winning symbols. Payouts can reach 5,625x your total bet if all multipliers work in your favour.

Arcane Gems is a relatively straightforward slot as far as gameplay is concerned. It’s not weighed down with unnecessary features. Instead, it takes a single feature and hammers it home relentlessly to very playable effect.

This slot centres on the Arcane Lock Mechanics feature. After a winning combination does hit, the successful symbols are locked and a respin follows. If a new matching symbol joins the original winning combination, it too is held and the process is repeated.

The respins continue until no new winning symbols is added to the main winning combination or you fill the whole of the reels with the same symbol.

Boosting your winning opportunities in Arcane Gems are multipliers. These become active when you fill all 3 positions in a column with matching symbols. You’ll then receive a randomly allocated multiplier of between 2x, 3x and 5x.

Each column that is filled comes with its own multiplier (which you can see at the top of the column). The values of these multipliers are combined. For example, if you landed a winner that had a 5x multiplier live on column 1 and a 3x multiplier active on column 3, the payout would be boosted by 8x.

If you land the maximum 5x multiplier in all 5 columns the payout would rocket courtesy of a massive 25x multiplier. This multiplier is then applied to your win from the symbols on the reels. The top 5 symbols can pay the following with a 25x multiplier:

The Arcane Gems slot comes with 5 reels, 3 rows and 9 paylines. To create a winning combination, you’ll need to land 3, 4 or 5 matching symbols in the same payline. Unusually, these winners don’t have to start from reel 1. You can also create a winner that starts on reels 2 or 3.

You can play Arcane Gems at bet levels that range from between 10p and £50 per spin. That offers something for players regardless of their bankroll. Click on the circled arrows to set up autoplay. You can set within 10 and 1,000 auto spins. There are opportunities to set up win and loss limits too. Click on the advanced tab then choose accordingly. If you want to ramp up the pace, you can play in turbo mode which quickens up the spins.

The RTP of 96.05% isn’t the highest you’ll come across. It’s on the low side of the medium range. The Arcane Gems volatility is on the high side of medium though. It’s not stratospheric but it’s feisty enough to offer some occasional big wins. On a scale of 1 to 10 we’d put the Arcane Gems variance as a 7. The max win is 5,625 x bet per spin. Slots from Quickspin are usually classy looking affairs and Arcane Gems certainly matches that description. The reels are set against a wooden table that’s filled with treasure maps, unusual coins and navigational instruments.

Those reels appear in what looks like a velvet lined jewellery box. As you might expect given its name, gem symbols take centre stage here. Joining the 4 playing card suit symbols are 5 more rewarding and brightly coloured gemstones.

The best of the quintet is the shimmering blue diamond. Land 3, 4 or 5 of these in combination and you’ll pocket an award equal to 2.5, 8 or 25x your total bet.

Those don’t seem like enormous numbers. Remember though, the respins can deliver big clusters of matching symbols. Add the multipliers into the mix and it’s possible to create some big combinations.

Accompanying the classy visuals is a magical, instrumental backing track which gives the game plenty of atmosphere. Arcane Gems is another visual and aural treat from Quickspin.

The gameplay in the Arcane Gems video slot is straightforward and repetitive. Some players might find the lack of variety a deal breaker but we certainly didn’t find Arcane Gems dull.

The Arcane Lock respins can deliver plenty of action. Add the multipliers into the mix and things can get quite exciting if you manage to get on a roll with the respins. Combine the gameplay with the quality sound and visuals and Arcane Gems becomes a simple but very playable take on the classic gemstone-themed slot.

If you want gems, the most popular slot online is NetEnt’s Starburst which is still the go-to slot for many players. Another slot worth playing featuring these precious stones is Perfect Gems from Play ‘n GO.

❓ What is the Arcane Gems slot RTP?

The Arcane Gems Return To Player (RTP) rate is 96.05%. We’ve seen high numbers than that but it’s not a shockingly bad number. On average, for every £100 wagered, £96.05 is returned in the form of prizes. It’s medium to high variance so expect smaller wins most of the time.

🥇 Is there an Arcane Gems mobile slot?

Yes, you can play the Arcane Gems slot game on your tablet or mobile device which uses iOS, Android or Windows. Quickspin’s design flair is on display, even in these small screen versions. The simple gameplay is well suited to mobile play too.

🎰 What is the Arcane Gems maximum win?

The most you can win from a single spin in Arcane Gems is 5,625 x your total bet. Fill the reels with the top paying diamond symbols then hope to see the maximum 5x multiplier on all 5 reels which gives a massive 25x multiplier boost.