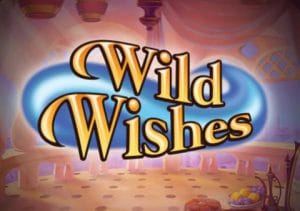 WHERE TO PLAY Wild Wishes SLOT

A Middle Eastern souk is the setting for Wild Wishes, an Arabian Nights style slot powered by Playtech. It’s a 5 reel, 15 payline game that comes with a bonus feature that can award up to 50 free spins as well as a magic lamp that can turn multiple symbols wild. Try and get your wishes to come true from between 15p and £75 per spin.

The visuals in Wild Wishes give off an air of opulence and wealth. Instead of playing cards the lower value symbols here are blue, pink and purple gemstones – they’re joined by higher value scimitars, cobras and a trio of human characters. The cheeky looking male is the top payer, awarding 750 coins if you land 5 in a payline. Offering the same amount is the portly genie who is also the game’s wild – he substitutes for all other symbols and can appear as stacked on the middle 3 reels in the base game.

The first decision to make on firing up Wild Wishes is whether to opt to add the Feature Play bet – this increases your bet size by 10 coins for every 15 coins bet: e.g. 15p per spin will increase to 25p per spin. For that extra investment, the free spins feature becomes easier to trigger.

Every time you hit a winning combination in the base game, 1 of 5 lamps will light up above the reels and you’ll be awarded a re-spin. If another win follows, a second lamp will be lit. The lamps continue to light if a winning spin follows.

After a losing spin though, the lamps will be switched off and you’ll revert back to zero. If you’re playing with the Feature Bet, the first lamp is already lit. The goal is to have 4 winning spins in a row to trigger the Free Games feature where you’ll be awarded 7 free spins. If you’re lucky enough to hit 5 wins in a row, that number increases to 10, 15, 20, 30 or even 50 free spins.

The free spins take place on a new set of reels. Instead of the usual 15 paylines, 40 are in play during the feature. There are more extras on offer in the feature courtesy of the Magic Lamp feature. During every free spin, a cloud of magic smoke will be released from the lamp. If a wild goes on to land on any of the squares covered by smoke, the whole of the magical cloud will turn wild. This can create some superb opportunities.

Playtech has created an impressive little slot here – the visuals are top notch and the action plays out to a haunting, Arabian style soundtrack that certainly improves the ambiance. Wild Wishes isn’t just pretty to look at though. The features are good too. The magic smoke in the free spins round is a cracking addition and adds plenty of possibilities.

Wild Wishes is a fairly volatile game with the variance in the medium to high range. Be prepared for some big swings but if you get lucky in the feature, your Wild Wishes could come true. For a similarly themed offering, Playtech’s Sultan’s Gold is highly recommended.