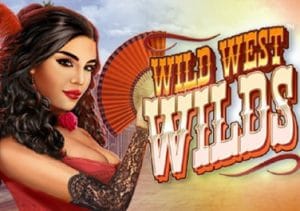 It’s time to don the virtual Stetson and join the sharp shooters trying to gun down a big jackpot in the Wild West Wilds slot. Created by Playtech, this cowboy-themed adventure is played using a 5 reel, 25 payline game engine and comes with classy sound and visuals and simple gameplay.  In our Wild West Wilds review, you’ll find out about respins and free spins that both come with special sheriff’s badge symbols that transform into sticky wilds. The free spins also come with multipliers which can reach up to 10x if you land multiple retriggers. Let’s saddle up and take a closer look.

Playtech has kept the gameplay in Wild West Wilds relatively straightforward. It’s not overloaded with bonus rounds but there’s enough going on in this dusty desert town to keep things moving.

This round is triggered by landing 2 of the pistol scatter symbol on reels 2, 3 or 5 on the same spin. 1 respin is awarded to begin with. Any silver sheriff’s badge that appears on the triggering spin is shot by a revolver and transforms into a sticky wild symbol. If a sheriff’s badge lands on the respin it too turns into a wild.

Land another 2 scatters and another respin follows. Land 3 and you’ll trigger the Free Games feature. The Free Game feature is triggered by landing 3 scatters on the same spin. That can be a standard base game spin or a respin. You’ll then go on to play between 5 and 9 free spins. You could also end up with a multiplier which can double or treble payouts throughout the round.

The 5 reel, 3 row format offers 25 paylines. Land 3 or more matching symbols on 1 of the those paylines, starting from reel 1 to form a winning combination. You can play from just 5p per spin to as much as £500 (a spin).

Autoplay is an option here. You can set between 5 and 100 spins. There’s no possibility to set win or loss limits but you can play until the feature is triggered. That’s the Free Games feature by the way and not the Respin feature.

The RTP in Wild West Wilds is 96.14% which is about average. We found these sharp shooters delivered some pretty volatile action. The variance here is in the high range. You might endure some spells as dry as the Texas desert. Get on a roll with the multipliers in the free spins and the loot can quickly build. A classic old West, one horse town forms the backdrop to the action in the Wild West Wilds slot. The reels are flanked by wooden buildings.  There’s a hint of country about the backing track but it’s rather subdued and sedate. We expected a bit more oomph on that score. It doesn’t really add much to the atmosphere here.

On those reels you’ll find A to J royal values as well as 4 higher paying character symbols. There’s a Clint Eastwood-style outlaw, a show girl, a Dr Quinn Medicine Woman and a grizzly old sheriff. Land 3, 4 or 5 of the sheriff symbol in combination and you’ll pocket a prize equal to 1, 8 or 50 times your bet.

As you’d expect from a slot with this title, wilds are central to much of the best action here. The brown wild is the standard wild. This replaces all the standard symbols and can help form part of a winning combination in both the base game and the bonus round.

There’s also a silver sheriff’s badge which can developer magical wild properties when it appears in either of the game’s 2 feature rounds. The 2 wilds pay like the high value sheriff symbol. There’s also a scatter which doesn’t offer any payouts.

Playtech’s HTML5 technology means that Wild West Wilds is available on desktop, tablet and mobile devices including Apple and Android. The simple design and gameplay works well on the smaller screen. No grumbles here.

Wild West Wilds is a rather simple slot. If it was a movie, it’s more in the style of The Good, The Bad and the Ugly rather than say The Hateful Eight.

The bonus features can deliver some pretty good action though. The respins come along regularly. The free spins are harder to find but the multipliers and sticky wilds can make the wait worthwhile and give you 10,000 x bet payouts.

The Western-themed slot has enjoyed something of a renaissance. Wild West Wilds is another decent enough addition to the field. However, the best slot is Dead or Alive II from NetEnt which offers potential wins of 111,111 x bet payouts from 1 of free spins features.

❓ What is the Wild West Wilds RTP?

The Return to Player rate of Wild West Wilds is a reasonable 96.14%. Being a high variance slot, most wins will come in the base game with the bigger and less frequent wins from the Free Games feature.

🥇 What is the Wild West Wilds slot max payout?

Wild West Wilds comes with a 1,000 x bet max win. If you apply the potential 10x multiplier in the Free Games feature, you could win 10,000 x bet per free spin.

🎰 Can you play Wild West Wilds on mobile?

Yes. The Wild West Wilds slot is available to play on tablet and mobile devices as well as laptops and desktop computers.

⭐ Is there a Wild West Wilds free spins feature?

Yes. Trigger this feature and you’ll play between 5 and 9 free spins. Boosting your chances here are sticky wilds and multipliers. Each retrigger increases that multiplier by 3x, up to a maximum of 10x. There’s also a respin feature with sticky wilds.