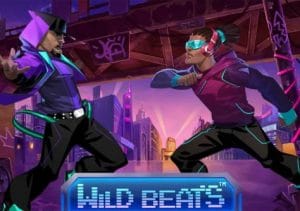 WHERE TO PLAY Wild Beats SLOT

Urban street dance is the theme on offer in Wild Beats, a 5 reel, 25 payline video slot from Playtech. Boasting superb sound and visuals, look out for the Dance It Out feature where lower value symbols on the middle 3 reels can turn into extra wilds. Play from 25p to £10 per spin on laptops, PCs, mobile and tablets.

The design team at Playtech has crafted a superb looking game here – a graffiti-strewn city underpass forms the backdrop to the reels. The lower value symbols are neon lit silhouettes of break dancers. More lucrative are the baseball caps, sunglasses, headphones and trainers. The top paying symbol is the ghetto blaster which will get you 5, 40, 70 or 500 coins if you land 2, 3, 4 or 5 on a payline.

To land those 4 and 5 of a kind combos, you’ll need a little help from the special wilds that spin on reels 2 and 4 only. If you’re lucky enough to land both of the special wilds on the same spin, you’ll trigger the Dance It Out feature. Any lower value break-dancer symbol that are on the middle 3 reels with the special wilds will also turn into a wild. A new payout consideration is then made with all of the extra wilds in position.

As far as volatility goes, Wild Beats is in the low to medium range. You can expect plenty of lower value wins and the occasional biggie with not much in the middle. The design here is as good as you’ll find anywhere – the visuals are superbly done and the beat heavy soundtrack is a perfect accompaniment. The features don’t quite match the design though.

Sure the Dance It Out feature has the potential to be a cracker. We’d have liked to have seen a little more variety though. That said, there’s still enough play on offer here to make Wild Beats worth a spin. Alternatively, I would recommend you try Stars Awakening and Sultan’s Gold (both by Playtech) which are superb.