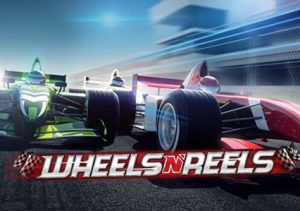 Go racing for a Formula 1 sized payout in Wheels N’ Reels, a motor racing themed video slot to roll of the Playtech production line. It’s a 5 reel, 20 payline game that comes with a cracking bonus round where you could win unlimited free spins complete with multipliers that can boost payouts by up to 10x. Rev up on your PC, tablet or mobile device from between 20p and £500 per spin.

Playtech has kept things pretty straightforward on the design front. It all rather classily done though. Behind the reels you’ll see a tarmac F1 circuit and a packed stand full of fans. The reels include A to J royal symbols plus a driver’s helmet and 3 racing cars. The most lucrative of the cars is the red one which will get you an award of 50 times your bet if you land 5 of them on a payline.

More rewarding still is the chequered flag which is the wild. As usual, this substitutes for all of the standard symbols. It can deliver some pretty chunky results in its own right too, offering payouts of 0.5, 5, 50 or 500 times your bet if you land 2, 3, 4 or 5 in combination. There’s also a scatter, the trophy. This pays 5, 10 or 50 times your total bet if you land 3, 4 or 5 of them anywhere on the reels on the same spin.

You’ll then be taken to the track’s pit lane and offered the pick of 5 tyres. This decides how many free spins you’ll receive. You could get up to 20 free spins here. A second set of tyres then follows. Choose 1 to reveal a multiplier. This will be in play throughout the feature and can boost payouts by up to 10x. Unlimited retriggers are possible in the feature too.

It’s a similar story with the gameplay. You won’t find anything too exotic here. The free spins round offers some potential thanks to the multipliers though – up to 100,000 times your bet if you get a 10x multiplier and fill the reels with wilds.

Petrol heads should find plenty to like here. Even if motor racing isn’t your bag, the multipliers in the feature round make this circuit worth a spin. I also suggest Playtech’s Buckle Up which has a similar theme.