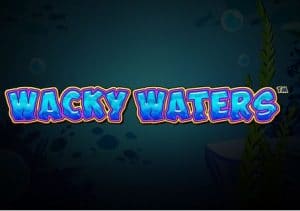 WHERE TO PLAY Wacky Waters SLOT

Outrageous ocean action is on offer in Wacky Waters, a 5 reel, 15 payline slot from Playtech. This underwater cartoon adventure comes with a trio of features that offer extra wilds, a pick me round and free spins with multipliers and bonus wilds. Make a splash from between 15p and £1,125 per spin.

The visuals in Wacky Waters have a suitably comedic feel – look out for bubble style playing cards from A to J alongside 7 aquatic creatures including a sullen starfish, grinning octopus and smirking shark. They’re joined by a trio of feature inducing symbols.

Land 3 or more of the hermit crab scatter to trigger the Cash Crab feature. It’s a straight pick me round – the more crabs that triggered the feature, the more picks you’ll get. Prizes of up to 100 times your stake are on offer here.

When Albert the Blowfish hits on the middle of reel 3 you’ll trigger the Puffin’ Up feature – the portly fish deflates and in his wake reveals a trail of between 1 and 6 wilds symbols anywhere on the reels. A new payout is then made with the added wilds in place.

Finally, there’s Albert’s Underwater Bonus feature which is triggered when 3 ship’s anchor symbols land on reels 1, 3 and 5. Albert is stuck at the bottom of the ocean and needs to make it to the surface before his air runs out. Choose 1 of the 3 paths that he can take.

Wacky Waters is a very entertaining slot – it looks terrific and plays out to a gentle, bubble filled backing track in the base game and something far more energetic in the bonus features. The variance is in the medium range with decent wins possible in both the base game and the features. The pick of those is Albert’s Underwater Bonus feature where the added extras can really get the cashier flowing.

If you’re looking for some light-hearted, cartoon adventure that still packs a decent winning punch, then you should dive into these Wacky Waters. If you like slots that are set in water, Net Entertainment’s Lucky Angler is very underrated – you can’t go wrong with the volatile Lord of the Ocean from Novomatic either.