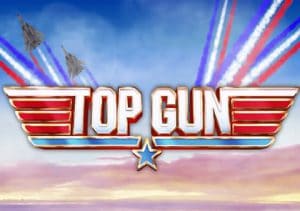 WHERE TO PLAY Top Gun SLOT

Strap yourself in and get ready for take-off in Top Gun, a 5 reel, 243 ways to win slot from Playtech. Based on the classic 80s movie starring Tom Cruise and Val Kilmer, this Air Force adventure comes with a randomly triggered Dogfight Bonus feature that turns up to 15 wild symbols as well as a free spins feature with enhanced wilds. Go up, up and away from between 25p and £250 per spin.

The first thing to note in Top Gun is that it uses the 243 ways to win game engine rather than traditional paylines – winning combinations are formed when the same symbol lands on successive reels. It certainly keeps the pace flowing at a decent rate.

Visually, Top Gun is an impressive effort – the imagery has an arcade game feel with the reels set against a deep blue skyline backdrop. Symbols include playing cards from A to J, aviator glasses and bomber jackets as well as characters from the movie itself.

Look out for Jester, Stinger, Goose, Iceman and Charlie (Kelly McGillis). Charlie is the best paying symbol, offering 1,000 coins for a 5-symbol combo. The only main character missing is of course Maverick (aka Tom Cruise) who for some unfortunate reason didn’t make the cut (due to image rights I am sure). The Top Gun Logo is the wild, substituting for every other symbol apart from the scatter – land 5 wilds for a 1,500-coin win.

The wilds feature heavily in the first feature on offer in Top Gun, the Dogfight Wilds feature – triggered at random, your wingman will fly onto the screen and fire off a salvo of missiles at the reels. Wherever these land will turn those symbols into wilds – between 1 and 15 wilds will be added to the reels for this feature giving you a nice boost to your winning chances.

Land the jet scatter on reels 1, 3 and 5 to trigger the Dogfight Free Games feature. Once activated you’ll be awarded 8 free spins, complete with enhanced Dogfight Wilds which offer even more opportunities to create winning combinations.

As you’d hope from a slot created by a major movie studio and one of the slot world’s biggest developers, Top Gun looks and sounds superb. The imagery is crystal clear, the animations super slick and gameplay nice and smooth. Even the cheesy listening version of “Take My Breath Away” works well (there’s “Danger Zone” by Kenny Loggins to enjoy in the free spins feature too).

The variance is in the medium range with decent winning opportunities on offer in both the base game and the free spins round. Fans of the camp 80s classic will find much to enjoy in the slot version of Top Gun – get lucky with those extra wilds and you can fly away with a decent trail of coins. If you like slot games based on popular films, Jurassic Park by Microgaming is recommended as to is The Avengers by Playtech.