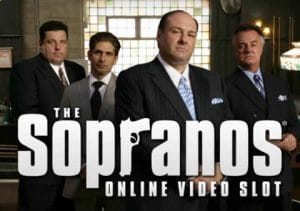 WHERE TO PLAY The Sopranos SLOT

The Sopranos is a 5 reel 25 payline slot powered by Playtech. It’s based on the American television drama revolving around the New Jersey-based Italian-American mobster Tony Soprano (played by James Gandolfini). The series was considered the most financially successful series in the history of cable television and regarded as one of the greatest TV series of all time. The slot game features all the main characters including Tony, Paulie, Christopher, Johnny, Bobby and Artie – you can play from 25p a spin to a whopping £1,250 a spin.

The Sopranos slot game has lots of bonus features – in the base game, you can randomly trigger the Raid Bonus feature. You are presented with 4 envelopes with an equal cash prize of 2 times your stake. You need to then hide them in 4 hideouts with each hideout holding up to 4 envelopes. 2 of the hideouts are then raided with the prizes taken away (if any inside). You will win what’s left in the other 2 hideouts.

Then there’s the Stolen Good Bonus feature which you can trigger by getting Stolen Goods Bonus symbols on reel 1 and 5 at the same time. You will have to choose from the 10 containers to win cash prizes. The prizes of all containers are presented at the side of the screen to see what you could win. You have 3 picks but you can choose after each pick if you want to keep the prize or choose another container.

The Bada Bing Bonus feature is activated by obtaining 3 Bada Bing bonus symbols on reels 2, 3 and 4. You are then presented with 5 characters (Artie, Bobby, Christopher, Johnny or Paulie) – pick 1 of them for a cash prize and a meeting with Tony Soprano (the boss). A video will then be played (different video per character) where the character interacts with Tony. After your pick, you might get another chance to make another pick for another cash prize or you get to collect the winnings and end the feature.

The best thing about The Sopranos slot game is the Crime Family Free Games feature which is triggered by getting 3 Sopranos scatter logos) anywhere on the reels. The free spins feature has 4 modes! The 4 modes are unlocked from left to right and are as follows: Soldier, Capo, Boss and Family.

You will start with the Solider Free Games feature which is described below. To unlock further modes, you need to fill up the 3 bars under that mode. 3 scatters during the main game will unlock 1 step in the progress bar and 4/5 scatters will unlock 2 steps. Don’t worry, your progress is saved to you can pick up where you left off last time. Here’s the information on the 4 modes:

In the Capo Free Games mode, you will be rewarded with 20 free spins and a dynamic multiplier – this will be between 2x and 5x to start with. When a Paulie ‘Walnuts’ Gaultieri symbol shows up on the reels after a spin, the multiplier increases by 1. If no Pauli symbol appears, the multiplier decreases by 1. The multiplier will never be below 2x or higher than 5x.

The Boss Free Games mode gives you 10 free spins with 2 to 5 randomly distributed extra wilds to be won – these are awarded on every free spins. If you get a wild symbols in the centre of the 3rd reel, you will receive an extra 5 free spins. The Family Free Games mode rewards you with 10 free spins. Only wild, scatter and Family member symbols participate though for bigger wins. Wild symbols give you double wins when substituting.

The Sopranos promised to be a popular slot due to the success of the television series but I don’t like it very much. It’s a low variance game with plenty of small wins which really don’t excite me. The Boss Free Games mode looks the most rewarding with the 5 extra wilds you can get every free spin but don’t expect to win moderately either.

The Capo Free Games mode can give you 100x stake wins if you get a 4x or 5x multiplier but don’t hold your breath. I recommend you play The Incredible Hulk (also by Playtech) which is superb or the volatile Sultan’s Gold which is one of my favourites. As for television series-themed slots, you could always play Microgaming’s Game of Thrones.