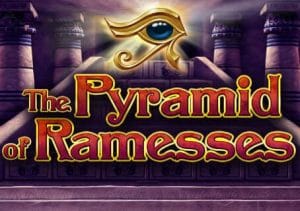 The Pyramid of Ramesses: Demo

WHERE TO PLAY The Pyramid of Ramesses SLOT

Enjoy some ancient Egyptian adventure in The Pyramid of Ramesses, a 5 reel, 25 payline video slot from Playtech. This desert trek comes with expanding wilds, a pick me pyramid feature and a free spins feature. Head to the land of the Pharaohs from between 25p and £25 per spin.

As you’d expect, the imagery in The Pyramid of Ramesses has a strong flavour of the ancient world – there’s no playing card filler here, all of the symbols relate to the Egyptian theme. The lower value symbols are all hieroglyphs featuring an assortment of animal-inspired gods.

More lucrative are the Egyptian warriors and chariots, each of which award payouts of up to 800 coins. Next comes the queen who offers up to 1,000 coins. Best of the lot is the mighty Pharaoh Ramesses – land 3, 4 or 5 of these on a payline and you’ll pocket a haul of 20, 300 or a whopping 15,000 coins!

The Scarab Beetle symbol is the wild – appearing on the 3 central reels only, it replaces all other symbols apart from the scatters. The wild can expand to fill all the positions in a payline when it hits.

The pyramid symbol is the scatter – land 3, 4 or 5 of these for a payout of 5, 10 or 100 times your total stake. You’ll also trigger the Free Games feature and be awarded 15 free spins. Hope to see the pyramids land on reels 2, 3 and 4 during the feature – instead of awarding extra free spins, you’ll trigger the Pyramid Bonus feature.

You’ll be taken to a chamber and presented with a pyramid made up of 6 levels – starting on the bottom row, pick a brick to reveal a multiplier prize. Work your way up the pyramid until you land a collect. A prize of 200 times your stake is on offer if you make it all the way to the summit. After the picks are completed, you’ll be taken back to the base game.

Finally, there’s a progressive jackpot to be won – this is triggered when you get 5 mighty Pharaoh Ramesses symbols on a winning payline. You need to be playing at £2 or more per spin to win a jackpot.

The cartoon-style hieroglyphs have a certain similarity so it may take a little while to get your eye in. Once you do, there’s much to like about the imagery (and sound) in this video slot.

This is a fairly volatile game so some caution is needed, especially if you don’t have an enormous bankroll. If you can cope with the swings, there’s plenty to enjoy. The expanding wilds can create some excellent combinations and the feature with pick me bonus are nicely done.

There are plenty of Egyptian themed video slots available and The Pyramid of Ramesses is one worth trying. I also recommend you try IGT’s Pharaoh’s Fortune which is still the best in my opinion.