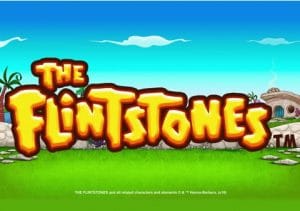 WHERE TO PLAY The Flintstones SLOT

Enjoy some classic cartoon capers in The Flintstones, a 5 reel, 1,024 ways to win video slot powered by Playtech. This trip to Bedrock comes with plenty of extras including mystery symbols and multipliers, a pick me round and a trio of free spins choices. Join Fred, Wilma, Barney and Betty from between 40p and £40 per spin.

The slot version of The Flintstones is a bright and bold affair – it’s like an old movie print that’s been restored. The imagery is super sharp, all accompanied by the classic “Meet The Flintstones” theme tune. A gold star for the design team here. How do the features stack up? Well there are plenty of them.

First we’ll look at the Bedrock Bowling Bonus feature which is triggered by landing the bowling ball on reels 1, 3 and 5. It’s a variation on the pick me round. You’ll be taken to a bowling alley – choose a bowling style to reveal a cash prize. Fred will then bowl a ball – the number of pins knocked down will determine the level of multiplier that will be applied to that prize. You have 3 throws in all – if you land a strike and knock all the pins over, an extra throw is awarded (as well as a hefty multiplier).

Next is The Flintstones Rocky Ride feature – on any base game spin, Fred and Barney can rumble onto the reels in their prehistoric car. The pair will throw mystery symbols onto the reels which will eventually all turn into the same symbol. Multiplier prizes are on offer here too.

The Flintstones comes with 3 Free Games features. To trigger them, land 3 Free Spins symbols on the central 3 reels – you’ll then be given 3 choices:

As mentioned above, the visuals in The Flintstones are top quality – symbols on the reels include ribs of meat, prehistoric phones as well as Wilma, Betty, Fred and Barney. Fred and Barney, as well as Dino, who is the game’s wild, are semi-stacked and cover 2 symbols. It all works very well.

The features are handy enough too – we enjoyed success in the Bedrock Bowling Bonus feature as well as in the free spins. Our preference for those bonus spins was the Wilma Wilds. They’re the highest variance option but can deliver some mighty results.

We were a little sceptical about what we’d find on firing up The Flintstones – it proved to be a very pleasant surprise, combining quality visuals with a nice range of extras. As cartoon adaptations go, this one will leave you yelling “yabadabadoo”.