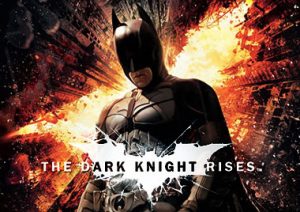 WHERE TO PLAY The Dark Knight Rises SLOT

The Caped Crusader battles Bane in The Dark Knight Rises, another video slot in the Batman series from Playtech. This one is played using a 5 reel, 576 ways to win game engine and comes with some impressive extras. Trigger the Fire Rises feature and your payout could explode thanks to a multiplier which can reach up to 25x. There are also 3 free spin rounds with wild and multiplier extras. Head to Gotham from between 40p and £80 per spin.

There’s a dark, brooding feel to the design in The Dark Knight Rises. The reels are set against a rain-sodden Gotham City skyline. You’ll see A to 9 playing cards spinning around the reels alongside the Batpod, Bane’s car, Commissioner Gordon (Gary Oldman) and Bane (Tom Hardy). The top symbol is Batman (Christian Bale) who awards 25 times your bet if you land 5 on adjacent reels.

Helping to create winning combinations is the Bat logo which is the wild – it appears on reels 2, 3 and 4 only and substitutes for everything bar the bonus symbols. As we’ve come to expect from the video slots in this series, there’s a decent array of bonuses on offer in The Dark Knight Rises:

The Fire Rises feature – fill reels 2, 3 and 4 with the same stacked symbol to trigger this extra. Reels 1 and 5 are then loaded with multiplier values, up to 5x, and spin again. The amounts are combined then applied to your original win. This can send payouts soaring by up to 25x!

Fusion Reactor Bonus feature – this round is triggered by landing 3 scatters on the middle 3 reels on the same spin. Spin the bonus wheel to award free spins and multipliers for Batman or Bane. Keep spinning the wheel until Bane or Batman hit the stop button.

If Batman hits the stop, you’ll get his free spins and multipliers in The Dark Knight Rise Free Games feature – whenever Batman hits on the middle 3 reels, he turns wild.

If Bane hits the stop, you’ll get his free spins and multipliers in the Born in Darkness Free Games feature – when Bane hits on the middle 3 reels, he turns wild.

If Batman and Bane hit the stop button at the same time, you’ll win their combined free spins and multipliers in the Gotham City Reckoning Free Games feature – both Batman and Bane will turn wild if they hit on the middle 3 reels in this round.

Like the other games in this series, there’s plenty to like here. The features offer some very decent potential, especially if you manage to get the Batman and Bane combined extras in the Gotham City Reckoning Free Games feature. I still prefer The Dark Knight but this sequel still manages to deliver plenty of entertainment.