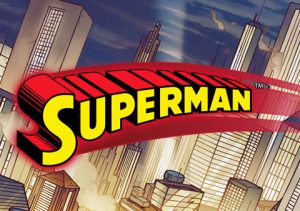 WHERE TO PLAY Superman SLOT

Join the Man of Steel as he does battle with a quartet of baddies in Superman. This 6 reel, 4,096 ways to win video slot has been created by Playtech and harks back to Superman’s comic book roots. Highlights of the gameplay include Power Symbols that can expand in a cross shape in 4 directions. There’s also a feature round where between 8 and 100 free games (initially) are up for grabs. Play on your computer, tablet or mobile device from between 40p and £500 per spin.

: Head to the city of Metropolis

Playtech has created a cracking looking video slot here. The skyline of the city of Metropolis forms the backdrop to the action. On the reels you’ll find brightly coloured A to 9 symbols as well 4 baddies including Lex Luthor. The most lucrative symbol is Superman (in his classic fist out, flying pose). Land 6 of him on adjoining reels, starting from reel 1 and you’ll be in line for a payout of 10 times your bet.

Helping to create these winning combinations is the famous red and yellow S logo which is the wild. This can land on all 6 reels and replace all the standard symbols. There are 3 extras in Superman.

On any spin in the base game, a symbol could benefit from a Power Up. This expands that symbol by 1 position in a cross formation if that expansions leads to an improved combination or a new win. This is known as the Power Symbols feature.

To activate the Free Games feature, you’ll need to hit 3 or more of the scatter (the Daily Planet logo) on the same spin. The more scatters, the more free spins on offer.

The Power Symbols in play during the free spins round are the top paying Superman symbol. If these fall nicely the coins can quickly build. Re-triggers are possible too. An extra 5 free spins are added if you land just 2 scatters on the same spin. Hit 3, 4, 5 or 6 and you’ll get another 8, 15, 25 or 100 free spins.

You’ll also have a chance to land a Mini, Minor, Major or Grand jackpot prize as Superman is part of the DC Super Heroes Jackpot Game feature. Randomly triggered, you are guaranteed to win a jackpot if you enter the feature. The Grand Jackpot is the most lucrative which has reached well over £1 million before.

The design in Superman harks back to the original comic book source material. It’s all very nicely done. There isn’t a massive amount of variety on offer from the features but the Power Symbols and free spins keep things moving quickly enough. If you fill the reels with Superman symbols, you’ll win 40,960 times your total bet though!

We liked Superman. It looks terrific and the simple gameplay is solid enough to keep things interesting. If you’re a fan of the DC Comics Universe and fancy a blast of retro play, then Superman delivers just that. For more superhero action, Playtech has plenty of their DC Comics range with Justice League and The Dark Knight my recommendations.