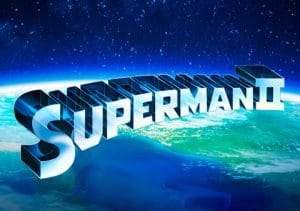 WHERE TO PLAY Superman II SLOT

The 1980s incarnation of the Man of Steel gets the video slots treatment in Superman II, a 5 reel, 25 payline title from Playtech. Based on the 1980 film starring Christopher Reeve as Superman, Margot Kidder as Lois Lane and Terence Stamp as arch baddie General Zod, it comes with 3 free spin features as well as a pair of pick ’em rounds and a shot at 4 progressive jackpots. Take to the skies on all devices from 25p per spin.

The skyscrapers of Metropolis form the backdrop to the reels in Superman II – symbols on show include A to J playing cards as well as Clark Kent’s black-rimmed spectacles, a crystal of kryptonite, Lois Lane and baddies Zod, Ursa and Non. Superman is the most rewarding standard symbol – a 5-in-a-row combination awards 1,000 coins.

Superman’s famous red and yellow S shield is the wild – it substitutes for everything apart from the Daily Planet logo which is the scatter. 3, 4 or 5 wilds on a single payline will get you 15, 1,000 or 5,000 coins. An animated Superman can also fly across the reels at random in the Superman Wild feature and transform 2, 3 or 4 randomly chosen symbols into wilds.

Skyline Fight Free Games feature – an initial award of 10 free spins is made here. Watch out for Superman – when he lands, the free spins counter is frozen (in effect adding extra free spins to your total). Each Superman symbol that then lands boosts a multiplier by 1, up to a maximum of 5x. The evil General Zod has the opposite effect – whenever he lands, the frozen counter is unfrozen and the multiplier reverts back to 1x.

You’ll also have a shot at winning a mega prize in Superman II as it’s part of the DC Super Heroes Jackpot network. This bonus is activated at random – pick from the icons on the matrix and you could win the Mini, Minor, Major or Grand jackpot. The latter will give you a minimum of £1 million.

As you’d hope from a tie-up between giants of the slots and movie worlds, Superman II looks excellent. There’s a whole load of action on offer too courtesy of the 6 bonus features. If you like plenty of variety in your play, then this won’t disappoint.

Many critics rate Superman II the best of the 1980s movies – this video slot version maintains those high standards. It is a highly entertaining adaptation that’s well worth a closer look. I would also suggest you take a look at the prequel, Superman The Movie and Man of Steel which feature the Metropolis Marvel.