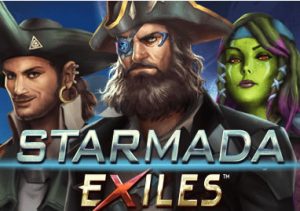 WHERE TO PLAY Starmada Exiles SLOT

Join the outlaw crew of galactic bandits in Starmada Exiles. This space pirate-themed video slot has been created by Playtech and is played using a 5 reel, 25 payline game engine. Land 2 scatters to trigger a pick me round where you’ll win a cash award or bring an extra wild into play when you subsequently trigger the free spins round. Play on your PC, tablet or mobile device from between 25p and £2,500 per spin.

The visuals are done comic book style. They’re not quite as sharp as other similarly themed video slots but do the job well enough. Set against a backdrop of moons, asteroids and spacecraft, the reels are made up of equipment symbols plus the 4 members of the exiles crew.

There are robot, male and female pirates as well as the ship’s captain which is the most rewarding symbol. Land 3, 4 or 5 of the skipper on a payline and you can look forward to an award of 2, 10 or 60 times your bet. There’s also a standard wild that replaces everything bar the scatter. The 2 features in Starmada Exiles are slightly unusual in that what happens in one can have an impact in the other.

Plunder Bonus feature – the Earth scatter hitting on reels 1 and 3 triggers the first feature. Pick from one of the scatters. This will reveal either an instant cash prize or a wild upgrade. Find the latter and 1 of the members of the Exile crew will be wild when you next trigger the free spins round.  After a wild upgrade has been selected, it turns into an emerald symbol. This then delivers an instant win prize whenever it hits.

Starmada Exiles Free Games feature – 10 free spins are awarded if you land the Earth scatters on reels 1, 3 and 5 on the same spin. Your extra wilds from the Plunder Bonus feature are in play here. Look out too for ruby red crystals that can hit on reel 5.

Whenever one of these hits, it lights up a meter above the reels. Collect 3 of them to turn another member of the Exile crew into a wild.  Landing 3 scatters delivers a full re-trigger and another round of 10 free spins. Once the round is complete, all of the green emerald symbols turn into scatters. This makes it a little easier to land the Plunder Bonus or the Starmada Exiles Free Games features.

We’ve seen flashier looking space-themed video slots than this. The slightly crude imagery matches the pirate theme rather well though. You don’t expect a game with this theme to be super smooth. The gameplay is a little unusual and the features come along regularly. We didn’t find this a particularly volatile game but you can pocket 1,500 times your bet on every spin or free spin.

The extra wilds can come into their own during the Starmada Exiles Free Games feature though, especially if you get multiple crew members wild. Manage that with a re-trigger and some big results are possible. This video slot combines 2 favourite slot themes – space and pirates. If you like either, then Starmada Exiles is worth a spin. I would also try Playtech’s Astro Babes which is definitely unique.