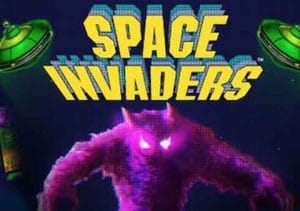 WHERE TO PLAY Space Invaders SLOT

Based on one of the most influential video games of all time, Space Invaders is a 5 reel, 10 payline video slot powered by Playtech. Featuring the same graphics and gameplay that made the original such a smash hit, it comes with transforming symbols, re-spins and added wilds. Try and safe the earth from between 10p and £100 per spin.

Alongside Pac Man, no game did more to take arcade action into the mainstream than Space Invaders – this slot re-boot largely keeps faith with the original release. The reels are set within a classic arcade machine and feature pixelated graphics that wouldn’t have looked out of place in the late 1970s.

Symbols include aliens, spaceships, flying saucers, monsters and a planet’s surface – all of the symbols can land as stacked, filling the whole reel in which they appear.

Just like the original game, the slot version of Space Invaders challenges players to protect the earth from alien invasion. One way to do this (and win some coins in the process) comes via the cannon that appears underneath the reels.

Hope to see the cannon stops under reels 2 or 4 as it activates the Invaders Turn Wild feature – any lower value pixelated aliens on that reel will be blasted away by the cannon and replaced by wilds. A new payout is then made with the new wilds hopefully working some magic. If you’re lucky, you’ll be able to turn multiple lower value symbols into wilds. Any successful combo that includes 2 or more wilds will see the payout doubled.

The other symbol to keep a special eye on is the red UFO which can swoop into the action above the reels. If the cannon and the UFO land in the same line on the same spin you’ll trigger the UFO Wild feature. After the original payout has been made, you’ll be awarded a re-spin.

The cannon will crank into action and destroy the UFO – from the debris will come a selection of wilds which are added at random to the reels. Another payout is then made with the extra wilds in position.

The visuals may look a little dated to players accustomed to the high definition, 3D imagery of today’s slots. The pixelated symbols have a definite charm though and will delight players of a certain age. As will the synth soundtrack.

The lack of free spins is a little disappointing – the features aren’t bad though and they hit at regular intervals. It’s unlikely that playing Space Invaders will see you break the bank. For a slice of low variance nostalgia, you won’t go wrong though. If you like the space theme, NetEnt’s Starburst is highly recommended and more volatile.