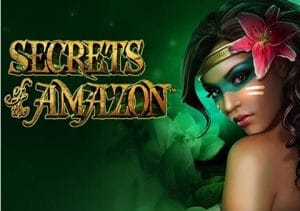 Secrets of the Amazon: Demo

WHERE TO PLAY Secrets of the Amazon SLOT

Venture deep into the South American jungle and try and discover the Secrets of the Amazon. This 5 reel, 20 payline video slot from Playtech pays double when the wild forms part of a winning combination. There’s also a bonus feature that awards between 5 and 50 free spins with expanding multipliers that can top 50x. Play from between 20p and £500 per spin.

The rich vegetation of the rainforest forms the backdrop to the reel in Secrets of Amazon – the symbols maintain the wild theme with frogs, lizards, snakes, parrots and toucans the lower value offerings. Higher up the payment food chain come a trio of big cats. The black panther is the most lucrative of the standard symbols, paying out 600 coins if you land 5 on a payline.

The mysterious Amazonian tribeswoman is the wild, replacing all other symbols apart from the wild – land 2, 3, 4 or 5 in a line for a payout of 10, 100, 1,000 or a whopping 50,000 coins. Whenever the wild forms part of winning combo, that payout is doubled.

The moonflower is the scatter – land 3 or more of them anywhere on the reels to trigger the Moonflower Bonus feature. Here you’ll be presented with 3, 4 or 5 flowers depending on how many scatters triggered the feature. Pick 1 to reveal the number of free spins.

You can re-trigger up to 50 free spins by landing the scatters during the feature which means enormous potential multiplier of 50x on your last free spin! The doubling wild payouts are in play during the feature too which can deliver some fantastic results.

The flora and fauna on show here combined with the sedate soundtrack may give the impression that this is a gentle slot. Don’t be fooled though – this is a volatile, high variance game. We sometimes missed completely on the free spins.

On other occasions we whiffed until the last free spin then hit a wild winner combined with a 15x multiplier which brought a bumper payout. If you have the bankroll and can cope with the undoubted down spells, there’s much to like here.

Well-designed and with a top notch feature, this is a very entertaining video slot. Unlock the Secrets of the Amazon and there could be riches hiding in this jungle. If you like the theme, you should play WMS Gaming’s Amazon Queen.