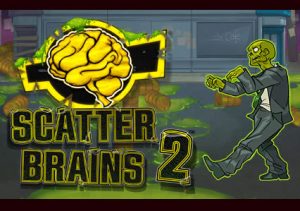 A horde of weapon-wielding cartoon zombies feature in Scatter Brains 2, a 5 reel, 243 ways to win video slot from Playtech. This sequel comes with some pretty tasty extras including a free spins round with walking wilds and respins. Look out too for special wilds that can treble payouts. Play on all devices from between 10p and £500 per spin.

A derelict building filled with radioactive waste drums is the setting for Scatter Brains 2. On the reels you’ll see lower value A, K, Q and J symbols as well as 5 humans who will battle the zombies with an assortment of weaponry including petrol bombs, pots and pans and axes.

The best of the standard symbols is the man in red brandishing the jemmy. Land 3, 4 or 5 of him on adjacent reels and you’ll win a prize of 1, 2.5 or 6 times your total bet. The radioactive symbol is the wild. It doesn’t offer any payouts but it does replace all of the standard symbols. Scatter Brains 2 comes with a 2 bonus features.

Free Spins feature – this is triggered by landing the brain scatter symbol on reels 2, 3 and 4 on the same spin. After a payout of 5 times your bet, you’ll receive 5 free spins. On each free spin, 3 zombies will walk onto the reels. Wherever they land turn into a wild.

If they land on 1 of the character symbols, the human turns into a zombie and you’ll be awarded a respin (the Respin feature) where all 5 reels will spin again. On the respin, the reels that feature zombie wilds are upgraded. During the free spins round, the scatter is replaced by the red brain feature wild. Hope to see a zombie land on the feature wild as it will bring with it a 3x multiplier which trebles the payout.

The comic book design is pretty basic here but works well enough. The feature, with its zombie wilds, respins and multipliers is a little confusing and takes a little getting used to. It can deliver some decent results if you get lucky with the 3x multipliers though – up to 4,374 times your total bet.

This zombie themed video slot didn’t really win us over. It’s solid enough but we found the gameplay a little on the dull side. If you like the zombie theme, then Scatter Brains 2 is certainly worth a look. If it’s not among your top genres, then we think you’ll find better alternatives elsewhere. Playtech offers plenty of other great video slots with Raiders of the Hidden Realm 1 of my favourites.