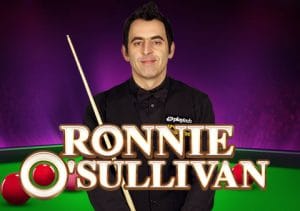 Based on the 5-times World Champion, Ronnie O’Sullivan Sporting Legends is a 5 reel, 25 payline snooker-themed video slot from Playtech. It comes with a multi-stage pick me round as well as free spins with 1x, 4x and 7x multipliers. Play on all devices from between 25p and £50.

The setting here is a snooker table – you’ll see A to 10 playing card values each with its own coloured snooker ball. They’re joined by the black and cue ball, a rack of reds, chalk and Ronnie playing a shot. The portrait of Ronnie is the best paying symbol – land 3, 4 or 5 of these and you’ll get 5, 20 or 100 times your bet.

More rewarding still is the wild which replaces everything bar the scatter and bonus. Land 5 wilds on a payline and you’ll receive a 200 times bet reward. Ronnie O’Sullivan Sporting Legends comes with 2 features.

Championship Bonus feature – this is triggered by landing the Championship Bonus symbol on reels 1 and 5 on the same spin. You’ll then be offered a selection of 5 reds – choose 1. If you land a cash prize, or better still, a win all, you’ll progress to the next round where the process is repeated. There are 5 rounds in all with increased rewards on offer in each.

147 Maximum Break Free Games feature – land 3, 4 or 5 the 147 Maximum Break scatter and you’ll win and award equal to 2, 10 or 50 times your stake. You’ll also be awarded 12 free spins. On the first 7 of those free spins the payout will be at a standard 1x. On the next 4 free spins, all payouts receive a 4x multiplier boost. If you’re lucky enough to land a winner on the final free spin, the payout rockets by 7x.

The game also offers the chance to win the Sporting Legends jackpots – these can trigger at random on any spin and award the Daily, Weekly or Mega jackpot. Ronnie O’Sullivan Sporting Champions is a very simple game. We enjoyed it though with both the bonus features offering some very decent winning potential.

With the Crucible just around the corner, this is the ideal video slot to get you in the mood. I would also suggest you try Frankie Dettori Sporting Legends which is part of the same series – if you like branded titles though, Playtech has lots to choose from with Batman v Superman: Dawn of Justice an excellent choice.