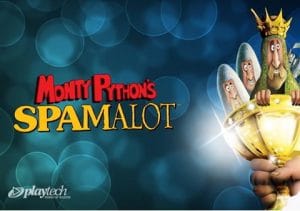 Based on the hit West End musical which in turn followed on from a classic movie, Monty Python’s Spamalot is a 5 reel, 20 payline progressive jackpot video slot from Playtech. Filled with the comedy team’s madcap brand of humour, it’s packed full of features including 4 bonus features plus free spins and a progressive jackpot. Play from between 20p and £20 per spin.

Just like the source material, Monty Python’s Spamalot has an anarchic feel – joining the lower value playing cards, are cartoon Sirs Robin, Lancelot and Galahad and the Lady of the Lake. King Arthur is the most lucrative nobleman, offering 600 coins if you land 5 in combination. The Holy Grail which is the game’s wild – 2, 3, 4 or 5 of these will get you 25, 150, 1,500 or 5,000 coins.

As we mentioned in the introduction, there are plenty of features on offer in Monty Python’s Spamalot – land the Bonus symbol on reels 1 and 5 to trigger the following:

Act One – Storm The Castle Bonus feature – position your knights below the castle from where flying cows are flung. If the cow misses the knights, you win a cash prize. If a knight gets squished, you lose. The round continues until all the knights have come to a sticky end.

Act Two – None Shall Pass Bonus feature – in this feature, you’ll take on Black Knight and battle it out for cash and multiplier prizes. Strike the knight with your blade and a cash prize is awarded. Miss the target and the multiplier, which starts at 5x, will drop by 1. The bonus cash, complete with multiplier, is awarded after 4 attempted strikes.

Act Three – Knights Who Say Ni Bonus feature – this is a classic pick ’em round. Select a shrub and win a cash prize. If you don’t like size of the award, you can choose another shrub. There are up to 3 rounds of picks on offer in all.

Final Act – Killer Rabbit Bonus feature – the trusty knights have to cross a path but there’s a band of killer rabbits standing in their way. Helping the noblemen on their way are a series of grenades. If the bomb fails to destroy the killer rabbit, 1 of your 6 knights will be eaten. If the grenade kills the giant bunny, all of the remaining knights will make it across the path. A cash prize is awarded for each surviving knight.

Monty Python’s Spamalot also comes with a Free Games feature which is triggered by landing 3 or more scatters anywhere on the reels – you’ll be given 10 free spins. On each of these free spins, up to 5 extra wilds are added. You’ll also have a shot at triggering the progressive jackpot if you get 5 The Jackpot Game symbols.

The Holy Grail Jackpot Game is a 6 level pick me feature – pick wisely and you’ll work your way up the pyramid. Make it to the summit and a massive prize could be waiting.

The Monty Python brand of humour is something of an acquired taste. Even if you’re not a fan, the features make this a very playable and enjoyable video slot. If you like branded titles, Playtech offers plenty with Ace Ventura Pet Detective recommended.