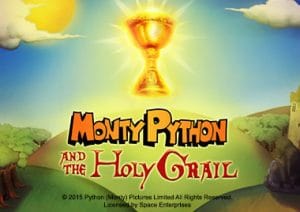 WHERE TO PLAY Monty Python And The Holy Grail SLOT

Join the bumbling knights of the round table on a quest for treasure in Monty Python And The Holy Grail. Based on the comedy team’s classic 1975 movie, this 5 reel, 30 payline video slot comes with a trio of free spin rounds complete with plenty of wild modifier extras. Join Cleese, Palin, Idle and co from between 30p and £750 per spin.

With their wacky soundtrack and inventive animations, Monty Python’s comedy always had a strong design style – that’s evident in this slot version. The backdrop to the reels includes a cartoon woodland that could have come straight out on 1 of their TV shows.

Available to land on all reels is the Monty Python logo which is the game’s wild – it does all the usual stuff, replacing everything bar the free spins scatter. Land 5 wilds on a payline and a 5,000 coin payout awaits. That sum is also on offer from the Holy Grail symbol which is a second wild – this can land on reel 5 only. It can spread across the reels and leave a trail of wilds though. Find a 5-long wild trail and you’ll pocket a 5,000-coin bonus.

The other symbol you’ll see spinning around the reels is the free spins scatter – when this hits on reels 1, 3 and 5 on the same spin, you’ll trigger the Quest of Camelot Free Games feature. You’ll then be taken to a new screen and given the pick of 12 shields.

Each 1 of these will have colour, a number of free spins and an associated modifier. Once you fill up the section with enough coloured shields, that’s the round you’ll play. There are 3 in all:

The Castle of the Britons Free Spins Modifiers

How long you get each modifier depends on the picks from the shield round. You can keep track of how many of each modifier you have left via the meter in the top left corner of the screen.

Just like the original film, this video slot adaptation has a somewhat surreal feel. Expect to land the free spins round at regular intervals and take advantage of the anarchic range of wild modifier extras. We’d put the variance in the medium range.

Featuring high-end visuals and a quality backing track, Monty Python And The Holy Grail is a well-designed game. There’s plenty of variety on offer from the features too thanks to the wild modifiers.

As Python video slots go, we prefer Monty Python’s Life of Brian – by Playtech’s sister company, Ash Gaming. Monty Python And The Holy Grail is a solid enough performer though. The combination of classy design and range of extras make this quest for the Holy Grail one worth undertaking though.