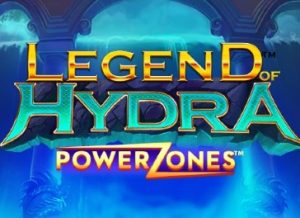 WHERE TO PLAY Legend of Hydra SLOT

Based on the mythical nine-headed water snake, the Legend of Hydra slot is a myth and legend-themed game from Playtech. It’s played using a 6 reel, 5 row game engine that offers 15,625 ways to win. The Power Zone feature can transforms all standard symbols that appear in the Zones into the same matching symbol. Fill meters to unlock Hydra features that award extra wilds, added Power Zones, multipliers and mystery transforming symbols. There’s also a free spins game where you can play unlimited free spins followed by a Mega Spin where all locked Power Zones transform into the same symbol. Discover more in our Legend of Hydra review.

The Legend of Hydra slot uses a 6 reel, 5 row machine. There are 15,625 ways to create a winner. You do so by landing 3 or more matching symbols on adjoining reels, starting from reel 1.

You can try and tackle the Hydra from between 10p and £200 spin. As usual, there are plenty of autoplay options if required. Set a defined number or leave them running until you trigger a feature. There’s also a Turbo Mode button for faster spin speed.

The Legend of Hydra RTP is an above average 96.56% which is a pretty good figure. The average is about 96% for an online slot game. Highly volatile, you won’t get many wins but they can be large if the symbols land favourably. That said, the max win is 10,000 x bet per spin or free spin.

The theme in the Legend of Hydra slot is epic myth and legend as it’s based on the snake-headed beast from Greek mythology known as Lernaean Hydra. The high definition graphics are very nicely drawn and packed full of detail.

The on-screen action is accompanied by a soaring orchestral backing track which really ramps up the atmosphere. It’s a perfect match for this epic theme. As usual for one of Playtech’s myth and legend slots, we’ve no complaints about the design of Legend of Hydra.

With a massive marble pillared building and sloshing waves in the background, the reels feature 6 lower value gemstone symbols and a quartet of warriors and wizards. The most rewarding symbols are the king and the queen, both of which pay 0.7 x bet if you land 6 in combination.

Playtech has created a Legend of Hydra mobile slot. Very playable it is too, combining impressive design with a varied range of extras. It works as well on a mobile and tablet device as on a PC or laptop.

There’s plenty to get stuck into in the Legend of Hydra slot game. Central to the action are the Power Zones which can create big clusters of matching symbols. There are also the 4 Hydra features and the free spins round. We’ll start by looking at the Power Zones feature.

On any spin, a gold meteor can appear on any symbol apart from the wild and bonus. This turns that symbol into part of a Power Zone. These Power Zones can connect with each other vertically or horizontally.

Land a gold meteor in the Power Zone and all the symbols in the Power Zone transform into the same matching symbol and a payout calculation is made. The positions revert to their standard state once a transformation has taken place.

When a gold meteor lands in the Power Zone, it adds to the Hydra Meter above the reels. When a meter if filled, you’ll open up a Hydra feature. There are 4 of these in total.

When you fill the Hydra Meter after all 4 features are unlocked, you’ll get a respin with a random Hydra feature. Here’s what each of the features offer:

Land 2 Bonus symbols to add 3 free spins to your total. Land 3 or more for a full retrigger. There are no limits to how many extra free spins you can win.

At the end of the free spins, you’ll be awarded a single Mega Spin where all the Power Zones transform into the same symbol and a new payout calculation is made. This is called the Mega Spin feature.

The market for slots with the mythical theme is already saturated. There’s always room for another one if the quality is as good as this though. Visually, the Legend off Hydra slot is terrifically well done.

The gameplay stacks up well too, offering lots of variety as well as some serious winning potential. The maximum payout is 10,000 x your bet. The biggest wins should come from the Mega Spin at the end of the free spins as you could have lots of Power Zones. Put all that together and you have another cracking addition to the Playtech stable.

Legend of Hydra is the second slot to use the Power Zones feature. The first was the Stallion Strike slot which offers even bigger payouts of up to 26,900 x bet per spin.

What is the Legend of Hydra RTP?

The Legend of Hydra return to player rate is 96.56%. That’s well above average and better than you’ll find from most slot releases. It’s high variance though so tread carefully.

What is the Legend of Hydra max win?

The most you can win from a single spin is 10,000 x your total bet. The key to winning big is from the Power Zones which can transform all symbols into the zones to the same symbol.

What are Power Zones?

These are special linked areas of the reels. If you land a special symbol in a Power Zone, all the symbols transform into the same matching symbol and a new payout consideration is made. Read more in the Power Zones feature section.

Is there a Legend of Hydra free spins round?

Yes, trigger the Mighty Hydra Free Games feature and you can win between 12 and 50 free spins. With unlimited retriggers available, you’ll get a Mega Spin once you run out of free spins. All accumulated Power Zones then transform into the same symbol for 1 final big payout.