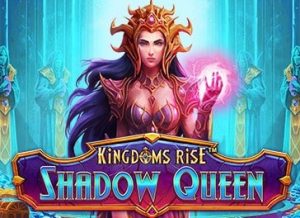 Another addition to Playtech’s epic fantasy series is the Kingdoms Rise: Shadow Queen slot. Like the other slots in this popular jackpot franchise, you can expect A+ design and some potentially exciting extras. The highlight is the Magic Wins feature which awards free spins where you’re guaranteed to land a winning combination. Each Magic Spin also awards a multiplier which increases by 1 on each free spin. Payouts here can reach up to 5,000 x your stake. There are also the progressive jackpots to consider too. Find out more in our depth Kingdoms Rise: Shadow Queen review. There’s a comic style to the imagery which is very nicely realised. The same goes for the orchestral backing track which fits the magical fantasy theme very nicely.

The reels are made up of 5 low value gemstones, a bottle of potion, a book of spells and 3 character symbols. The lord in armour with the bird perched on his shoulder tops the payouts. Land 2, 3, 4 or 5 of these in a line for a payout of 0.2, 1, 8 or 20 x your total bet.

The Shadow Queen symbol is the wild and replaces all symbols bar the scatter. You’ll notice that it will appear stacked 3-high on all 5 reels.

No complaints about the design. That’s true where you’re playing in standard desktop mode or the Kingdoms Rise: Shadow Queen mobile slot.

Kingdoms Rise: Shadow Queen is played using a 5 reel, 25 payline game engine. Simply land 3 or more matching symbols from left to right (beginning on reel 1) across any of the paylines to get a winning outcome.

You can play at bet of between 25p and £500 per spin. Click on the arrow next to the spin button for autoplay. You can run between 5 and 100 autospins or leave them running until you trigger the feature. The lightning bolt activates turbo mode.

The RTP for standard play is 92.47%. This rises by another 3.01% when you factor in the tokens elements. Add the contribution to the progressive jackpot prize pool and the overall return to player rate is a more respectable 96.46%.

Medium to high variance, you can win up to 5,000 x your total bet on each spin. Well, you can win more with the progressive jackpots (more information below).

There isn’t an enormous array of extras on offer here. The main bonus feature can be well worth winning though as it awards free spins with guaranteed wins and expanding multipliers. Of course, there are the progressive jackpots up for grabs.

Land the swirling scatter symbol on reels 2, 3 and 4 on the same spin and you’ll activate the Magic Wheel feature. This is made up of concentric rings. Spin the outer ring first. If the pointer lands on a number, you’ll play that number of free spins.

If you land on an arrow, you’ll advance to the next wheel where you could land a higher number of free spins. The process is then repeated. Make it all the way to the centre and you’ll receive the maximum 10 Magic Wins:

That’s not all though. On each free spin, a multiplier increases by 1. Land a big allocation of Magic Spins and the multipliers can have a big impact towards the end of the feature. Like the other slots in this series, you can collect tokens and then exchange them for a bonus feature. You can buy bonus features from other Kingdoms Rise slots.

You can also buy your way into the free spins with the following number of Magic Wins:

Higher bets have a better chance of landing a jackpot. There are 3 jackpots to be won:

Kingdoms Rise: Shadow Queen Thoughts/Opinion – one of the better slots in the series

We’ve found the gameplay in some of the Kingdoms Rise slots to be rather hit and miss. Kingdoms Rise: Shadow Queen sits in the former camp. The range of extras isn’t massive but the free spins with guaranteed wins and an expanding multiplier is a potentially exciting combination.

Plus, there are always the jackpots to consider. Combine that gameplay with the high-class sound visuals and you have a very playable addition to this popular series. I recommend you look at the Kingdoms Rise: Chasm of Fear game as it offers 10,000 x bet wins on every spin.

Yes, this instalment in this epic fantasy series offers a shot at landing 3 progressive jackpots. The Kingdoms Rise Jackpot feature can trigger at random on any spin.

What is the Kingdoms Rise: Shadow Queen RTP + max win?

The Kingdoms Rise: Shadow Queen return to player rate is 96.46% overall which is good for a jackpot slot. The maximum win (excluding jackpots) is 5,000 x your total bet.

What are Magic Wins?

These are a series of guaranteed winning free spins that are awarded after spinning the Magic Wheel feature. Land 6 Magic Wins for example and you’d land 6 winners. These also come with a multiplier that increases with each free spin.

What is the Kingdoms Rise shop?