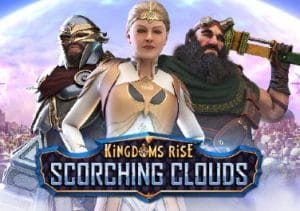 A city in the sky is the setting for the latest addition to Playtech’s popular fantasy series. The Kingdoms Rise: Scorching Clouds slot combines superb design with a wide array of features. Those features include cluster pays, spreading wilds, streak-style respins and 2 different free spin bonuses. These come with special transforming symbols and offer varying degrees of volatility. You’ll also have a shot at landing a potentially massive progressive jackpot prize. Does this match the other slots in the series? Found out in our in-depth Kingdoms Rise: Scorching Clouds review.

Some of the slots in the Kingdoms Rise series have been rather skinny on the gameplay front. That’s certainly not the case with Kingdoms Rise: Scorching Clouds which is packed full of features.

After a winning combination is created, a cascade follows. The successful symbols are removed from the reels and new symbols drop and replace them. The cascades continue if a new winning cluster is formed.

At the bottom of the reel grid you’ll see 3 positions that are highlighted. Land a wild in one of these positions to trigger the Spreading Wilds feature. Between 2 and 4 wilds are then dropped onto random positions on the reels and a new payout consideration is made.

Each time a Dragon Egg symbol appears it is collected in a meter. That symbol position then transforms into a wild for that spin. Land an egg in a highlighted position and you’ll also trigger the Spreading Wilds feature.

These are activated once you’ve collected 6 Dragon Egg symbols in the meter above the reels. During these respins, the game mechanic is reversed.

Instead of winning symbols being removed, they lock in position and a respin follows. Each round continues until no new matching symbol or wild joins the cluster. You’ll have 6 respins in total.

The animal skull is the scatter symbol. Land 3 or more these on the same spin and you’ll trigger the bonus round. You’ll then have the pick of the following 2 free spin features. The RTP is the same in both but one is more volatile than the other.

Trigger the round with 3, 4 or 5 scatters and you’ll receive 8, 10 or 12 free spins. These take place on reels where the Engineer and Empress symbols are removed.

Each time you land a hammer symbol next to a Knight, it transforms into a knight to potentially increase the winning cluster. This is a medium variance option.

Opt for this round and you’ll receive 5, 6 or 7 free spins if you triggered with 3, 4 or 5 scatters. Any hammer, wrench or telescope symbols that land next to an Empress all morph into the Empress symbol. This is a high variance round.

The Kingdoms Rise: Scorching Clouds slot is part of the Kingdoms Rise Jackpot network, so you’ll have a chance to land a potentially enormous progressive jackpot prize. The jackpots can trigger at random on any paid spin:

The action takes place on a 5×5, cluster pays grid. Winning combinations are formed by landing horizontal and vertical clusters of the same matching symbol. The more symbols in the cluster, the bigger the awards. Stakes start at 10p per spin, rising to a truly eye-watering £2,000 per spin.

To set autoplay, simply click on the smaller play button below the reels. You can set between 5 and 100 spins. There aren’t any win or loss limits but you can end autoplay whenever you trigger a feature. To speed up play, click on the lightning bolt which activates turbo spin mode.

Medium to high variance, the RTP is an impressive 97.06% which is above average. However, the most you can win is 163 x your bet from a Dragon Egg respin. You can win a lot more from the jackpots.

The design in Kingdoms Rise: Scorching Clouds is superb. There’s a steampunk feel to the visuals which are excellent. The reels are set on the bridge of an airship which is flying over a city. To the side of the reels is an animated engineer keeping things afloat.

On the reel grid you’ll find gemstone playing card suit symbols alongside a wrench, telescope and hammer. More rewarding are the 3 characters symbols. There’s the engineer, the knight and the empress. The empress is the most rewarding symbol. Land a cluster of 10 or more for a payout of 100x your total bet.

The superb visuals are matched by a very catchy, instrumental soundtrack. It fits the theme very well and gives the game plenty of atmosphere.

The game interface is simple and easy to use. Setting up autoplay and stake levels is straightforward. Click on the i button for the paytable. The ? in the bottom right-hand corner of the screen offers more in-depth information on the gameplay and features.

The Kingdoms Rise: Scorching clouds mobile slot is rather good. Despite all the moving pieces, the design stands up rather well. For the full effect try and play on a bigger screen. It’s fine on handheld though.

I’ve been a bit underwhelmed with the gameplay in some of the Kingdom Rise slots. We’ve no such complaints about Kingdoms Rise: Scorching Clouds, visually. Like the other slots in this series, the design here is excellent. The detailed visuals and catchy backing track deliver plenty of atmosphere.

The features here deliver plenty of variety and the cluster pays and cascading reels keep the pace ticking over nicely in the base game. However, the max win per spin is low and only offers big wins from the progressive jackpots.

If you’ve been tempted by other Kingdoms Rise slots but never dived in, Kingdoms Rise: Scorching Clouds isn’t a good place to start. Kingdoms Rise: Forbidden Forest is much better and offers much bigger potential returns.

❓ What is the Kingdoms Rise: Scorching Clouds RTP?

The RTP of 97.06% stacks up well when compared to many other slots. It’s certainly above average. Most progressive jackpots slots are around the 95% mark.

Yes, Kingdoms Rise: Scorching Clouds offers a chance to land 3 progressive jackpot prizes. The Mega Jackpot begins at £100,000 and can rise with no limits.

🎰 What features does Kingdoms Rise: Scorching Clouds have?

⭐ What is the Kingdoms Rise Shop?