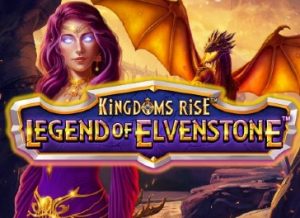 WHERE TO PLAY Kingdoms Rise: Legend of Elvenstone SLOT

Playtech is back with another addition to its popular fantasy series. Fire-breathing dragons are central to the action in the Kingdoms Rise: Legend of Elvenstone slot. It’s a relatively straightforward 5 reel, 10 payline game that comes with dropping wilds that can also expand and bring multipliers into play.  There’s also a streak respin round where collecting dragon’s eye symbols delivers cash prizes. Collect tokens to buy features from the Kingdoms Rise shop. There are also 3 progressive jackpots to be won. Does this match up to the other slots in the series? Find out in our detailed Kingdoms Rise: Legend of Elvenstone review.

The Kingdoms Rise: Legend of Elvenstone slot uses a basic 5 reel, 3 row, 10 payline game engine. A win is simply created when you land 3 or more matching symbols beginning from reel 1 across any of the 10 paylines.

Stake levels start at 10p, rising to a maximum of £500 per spin. You can set up to 100 autoplay spins or leave them running until you trigger a bonus feature.

The RTP if you’re not using tokens is a skinny 92.84%. This increases by 3% with the tokens and rises to 96.84% when you factor in tokens and the jackpot element.

Medium variance, you’ll get winning combinations quite frequently. Most of them will be under 20 x your total bet though. The bigger wins from the bonus features which give you multipliers up to 20x as well as cash prizes for coins collected. The max win on any given spin is 1,000 x your total bet which can be achieved from the Wild Drop feature (and it’s multipliers).

There are some slightly unusual extras on offer in Kingdoms Rise: Legend of Elvenstone. Central to the base game are dropping wilds. The main feature is a streak respin bonus where the payouts are a little bit different than the norm. Then you have the Kingdoms Rise shop and the progressive jackpots. Let’s take a closer look.

The glass orb is the game’s wild. As usual, this substitutes for all the standard symbol. Unusually, the wild sits on top of another symbol when it lands on the middle or bottom row. The wild drops down the screen 1 position at a time with each spin that follows until it falls off the bottom of the reel.

The wild can gain some extra properties if it appears on top of one of the 3 character symbols:

Furthermore, plenty of wilds can land on the woman which would increase the multiplier further. The multiplier can reach up to 20x if you’re lucky. The dragon symbol can land in stacked formation on reels 1 and 5 only. If the dragon covers 4 or more symbol positions across those 2 reels, you’ll activate the Dragon Bonus feature.

This is a variation on the streak respin feature. Reels 1 and 5 are filled with dragons while the 9 symbol positions on the middle 3 reels spin independently. 3 respins are awarded to start with. If you land a dragon’s eye symbol, it is held and the respins reset to 3.

Each dragon’s eye comes with a cash value attached worth up to 30 x bet. A payout is made after each new dragon’s eye lands, not at the end of the round.

The feature continues until you’re out of respins or you’ve filled up the grid. In the latter case, you’ll win the sum of all prizes twice on your last respin.

Alternatively, you can use your tokens to buy the Wild Drop Free Games feature. They are 2 options:

Legend of Elvenstone is part of the Kingdoms Rise network so you’ll have a shot at landing 1 of 3 progressive jackpot prizes. These can strike at random on any spin. You can land a jackpot at all stake levels. Here’s what each jackpot pays: Like the other slots in this series, there’s a glossy, high end look to the visuals in Kingdoms Rise: Legend of Elvenstone. The fantasy theme is well realised on screen. The comic book-style visuals are accompanied by a sweeping orchestral score which is popular with the fantasy theme.

On the reels are 4 gemstones alongside a helmet, a sword and shield and the 3 high value character symbols. The most rewarding is the bearded warrior symbol who pays 5 x your total bet if you land 5 across a payline.

The design works just as well on a tablet or mobile as it does in the desktop version of the slot.

Kingdoms Rise: Legend of Elvenstone Thoughts/Opinion – better than other slots in the series

While the Kingdoms Rise slots always look good, we’ve not always been thrilled with the gameplay on offer. Playtech has got things spot on with Kingdoms Rise: Legend of Elvenstone though.

The high-class sound and visuals are present. They’re also included some very good features too. The dropping wilds certainly enhance the base game and the Dragon Bonus feature can be well worth hitting.

The extras from the Kingdoms Rise shop can be worth getting too. The Wild Drop Free Games feature gives you the chance to land big multipliers which is whether the max win per spin is available. Add the jackpots to that mix and you have a very playable addition to the fantasy series.

❓ What is the Kingdoms Rise: Legend of Elvenstone RTP?

The standard RTP is a rather low 92.84%. Factor in the Kingdoms Rise tokens and the jackpot element (3%) and it rises to a far more reasonable 96.84%. This is higher considering it’s a progressive jackpot slot.

🥇 Is Kingdoms Rise: Legend of Elvenstone a progressive jackpot slot?

Yes, Kingdoms Rise: Legend of Elvenstone is part of the Kingdoms Rise network which gives players a chance to land 1 of 3 potential jackpot prizes. The one you want is the Epic Jackpot which begins at £100,000 and has no limits. Find out more in the Kingdoms Rise Jackpot feature section.

🎰 What features does Kingdoms Rise: Legend of Elvenstone offer?

Kingdoms Rise: Legend of Elvenstone comes with plenty of bonus features. In the base game look out for dropping wilds. These can come with multipliers or even spread to adjoining reels. There’s also a streak respin feature where collecting dragon eye symbols awards instant cash prize. You can also buy more features in the Kingdoms Rise shop.

⭐ What is the Kingdoms Rise shop?

On any spin, you could see a token attached to a symbol which are collected. When you have amassed enough tokens, you can exchange them in the shop. In the Kingdoms Rise Shop, you can buy bonus features including the Dragon Bonus streak respin with standard or double prize pool or 6 or 8 free spins with 1 or 2 starting dropping wilds. You can also buy features from other slots in the series.