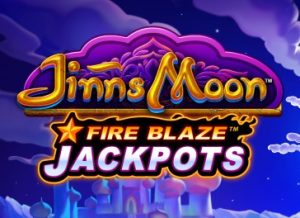 Desert sands are the setting for the Jinns Moon: Fire Blaze Jackpots slot, a 5 reel, 50 payline game from Playtech. For the uninitiated, Jinns are supernatural creatures from early pre-Islamic Arabia. Part of the Fire Blaze series, it comes with a streak respin round where you could land 1 of 4 jackpots which award prizes of up to 2,000x your total bet. Look out too for mystery wilds and a re-triggerable bonus round that awards 8 free spins. Does this Arabian adventure offer the prospect of treasure? Find out in our detailed Jinns Moon: Fire Blaze Jackpots review.

The theme in the Jinns Moon: Fire Blaze Jackpots slot dates back many centuries. The gameplay though, is modern and packed full of features. It includes wilds, free spins and the Fire Blaze bonus where big jackpots are up for grabs.

The Fire Blaze Respin feature is triggered by landing 6 or more of the moon symbol anywhere on the reels on the same spin. Those moon symbols are held and 3 respins are awarded. If a new moon symbol lands, it too is held and the number of respins revert to 3.

The round ends when you’ve used up your 3 respins or you’ve filled the whole of the reels with moons. You’ll notice that each moon comes with a cash value of 1, 2, 3, 4, 5, 10, 15 or 15 x your total bet. At the end of the feature, all the cash values attached to the moons are added together for your prize.

You can also land Jackpot Stars during this round. These can transform into Mini, Minor or Major Jackpots worth 20, 100 or 500 x your total bet respectively. If you fill all the positions on the reels with moon symbols, you’ll land the Grand Jackpot worth 2,000 x your bet. This comes on top of the value of the moons themselves.

The other bonus in Jinns Moon is the Free Games feature. It’s triggered by landing 3, 4 or 5 of the magic lamp scatter symbol on the same spin. You’ll pocket an award equal to 1, 10 or 50 x your total bet as well as receiving 8 free spins.

If you see any empty symbol positions on a free spin, they are filled with a randomly picked symbol. Landing 3 or more scatters on the same free spin delivers a re-trigger and another round of 8 free spins.

The 5 reel, 3 row machine in Jinns Moon has 50 paylines. Stakes start at 25p per spin, rising to an eye-watering maximum of £500 per spin. Just click the + and – buttons below the reels to adjust bet size. You can set up to 100 autospins or leave them running until you trigger a feature.

Medium variance, the RTP here is a solid 96.58%. That’s stacks up pretty well. The most you can win per spin or free spin is 150 x your total bet which is a little underwhelming. The best winning opportunities come from the respins where the Major Jackpot is worth 2,000 x bet.

There’s a rather opulent look to this desert adventure. The reels are set against a backdrop of sand dunes and dusty Arabian villages filled with palm trees and minarets. The reels are a regal purple and feature A to 10 royals alongside a scimitar, a magic carpet and a pot full of gold and treasure.

The top standard symbol is the magic monkey. He pays 0.2, 1 or 3 times your total bet if you land 3, 4 or 5 across a payline in 1 of the game’s 50 paylines. There’s plenty of detail in these cartoon-style visuals which are very nicely drawn.

There’s an Arabian backing track playing in the background which is rather impressive. It’s punctuated by Playtech’s usual sound effects which herald a winning spin which can be a bit jarring given the theme. This had us reaching for the mute button. That aside, this is another well designed slot from Playtech.

The classy, cartoon visuals work nicely in the Jinns Moon: Fire Blaze Jackpots mobile slot. The features here are relatively simple and straightforward too which makes the small screen version easy to understand and play.

This virtual caravan to Arabia is an enjoyable one. We’ve seen similar features in other games but the combination of free spins and the Fire Blaze Respin feature are a winning pairing. The design is as high end as we’ve come to expect from a Playtech slot. That’s true of both the visuals and sound.

The overall package of quality design, enjoyable features and a very solid 96.58% RTP make the Jinns Moon: Fire Blaze Jackpots slot well worth a spin. If you fancy trying other Playtech slots, they have so many good games to choose from. Begin with the iconic Age of the Gods slot which has 4 free spins features and 4 progressive jackpots. You should also try some of their DC Comics series slots with Justice League 1 of the better ones.

❓ What is the Jinns Moon: Fire Blaze Jackpots RTP?

The Jinns Moon: Fire Blaze Jackpots return to player (RTP) rate is 96.58%. That’s a pretty good number and better than many comparable slots. Out of every £100 wagered, £96.58 is returned as prizes on average. This fluctuates in the short term of course.

You can’t win progressive jackpots but Jinns Moon offers the chance to land 1 of 4 fixed jackpots courtesy of the Fire Blaze Bonus. Fill the screen with moon symbols during the re-spins and you could land a jackpot worth 2,000x your total bet.

According to the Collins dictionary, “Jinns are a class of spirits, lower than the angels, capable of appearing in human and animal forms and influencing humankind for either good or evil”. They date back to pre-Islamic Arabia and take the shape of a monkey here.

⭐ Can you play Jinns Moon: Fire Blaze Jackpots on your mobile?

Yes, Playtech has created a Jinns Moon: Fire Blaze Jackpots mobile slot. The high-class sound and visuals found in the computer version are present and current in the mobile and tablet versions too. The gameplay is the same in all versions too.