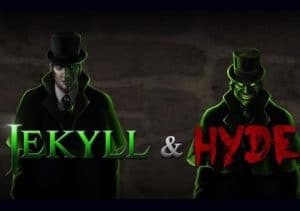 WHERE TO PLAY Jekyll & Hyde SLOT

One of the most famous horror stories of all times gets the slots treatment in Jekyll & Hyde, a 5 reel, 25 payline game from Playtech. This classic chiller comes with a pair of bonus features that offer free spins, sticky wilds and multipliers that can boost your wins by up to 5x. Play from between 25p and £2,500 per spin.

Not to be confused with the Microgaming slot of the same name, this version of Jekyll & Hyde has a dark, oppressive feel as far as visuals go. This isn’t a light-hearted cartoon romp. Joining the lower value playing cards are a top hat and cane, a notebook and a trio of characters from Robert Louis Stevenson’s story. The on screen action is accompanied by a suitably creepy soundtrack which enhances the moody atmosphere.

Dr. Jekyll is the game’s wild – he can only land on the middle 3 reels but when he does, he’ll transform into his alter ego Mr Hyde and expand to fill the entire reel.

The green potion bottle is the game’s scatter and is the key to unlocking the feature round – you’ll need to land 3 of them anywhere on the reels to trigger the Free Games feature. If you opt to play using the Feature Bet, you will also be able to include the red potion bottle in a triggering spin, even if it lands just outside the live reels. You have to pay extra for this privilege (double per spin) but it does improve your chances of activating the feature.

Once the feature round is triggered, you’ll be given 2 free spin options – choose the Jekyll Spins and whenever a scatter lands on reels 5, you’ll increase a multiplier which goes from 1x to 2x to 3x and eventually to 5x. Opt for the Hyde Spins and every time the scatter lands on reel 5, 1 symbol will be turned wild for the remainder of the free spins.

You won’t be awarded a set number of free spins – instead, as well as awarding 1 of the extras, the potion bottle will lose some of its liquid whenever the scatter lands on reel 5. You keep on spinning until the bottle has had 4 hits and it smashes.

The variance in Jekyll & Hyde is in the medium range – decent wins are possible in the base game but it’s the free spins feature where this slot flies. Both the Jekyll and Hyde options can deliver some decent payouts. Get the multiplier built up early on then hope for a decent run without a scatter and the coins can quickly build.

Jekyll & Hyde is a typically solid effort from Playtech – it looks fine and the feature round is a corker. If you like the horror genre, then this latest re-telling of a classing tale is well worth dipping into. I would also recommend Microgaming’s Immortal Romance and Ash Gaming’s Full Moon Fortunes which are both classics.