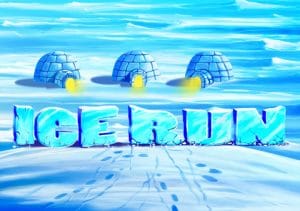 WHERE TO PLAY Ice Run SLOT

Enjoy some chilly, polar adventure in Ice Run, a 5 reel, 25 payline video slot powered by Playtech. The theme may be glacial but the range of features on offer here is pretty hot. Look out for stacked wild re-spins, a pick ’em round as well a free games feature that awards infinite free spins with all payouts trebled.

Ice Run is a pretty jolly affair as far as design goes – set against the freezing ocean, the reels feature the usual lower value playing cards (in this instance, carved out of ice) which are joined by fish, campfire, walrus and male and female Eskimos. There’s a jaunty little soundtrack too.

The most regularly hitting feature in Ice Run is the Ice Breaker feature – when the wild (the male Eskimo) lands in the centre position on the middle reel, the standard payout is made then the wild expands to fill the whole reel and you’ll be awarded 2 re-spins with the stacked wild locked in place.

Better still is if you land the wild on reels 2, 3 and 4 on the same spin – you’ll then be awarded a single re-spin with 1 giant wild on the middle 3 reels!

Land the huskies symbol on reels 1 and 5 to trigger the Ice Run Bonus feature which is a variation on the classic pick ’em round. First choose 3 of the 7 snowmen to reveal cash prizes. Then pick from 1 of 3 igloos which will award a multiplier of up to 5x which is applied to your snowmen cash. Finally, there’s a Snowball feature – triggered at random, this awards all subsequent prizes on offer.

The game also comes with a Free Games feature which is triggered by landing 3 Ice Run scatters anywhere on the reels. You’ll then receive 10 free spins with all payouts trebled. Land the scatters again and you’ll trigger even more free spins as there’s no limit to how many free spins you can win.

As far as volatility goes, this isn’t a particularly fiery video slot as the variance is in the low to medium range. We enjoyed most success with the sticky wilds. Land a re-spin with the 3 middle reels fully stacked and some impressive payouts are certainly possible.

Well-designed as usual and offering a good range of features Playtech has created another simple yet entertaining slot in Ice Run. It does remind me of Age of the Gods Prince of Olympus when it comes to its bonus features which is a good thing.