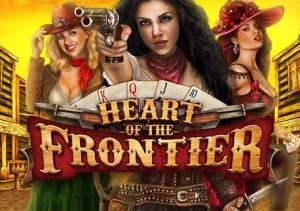 Heart of the Frontier: Demo

WHERE TO PLAY Heart of the Frontier SLOT

Take a trip to the American west in Heart of the Frontier, a 5 reel, 20 payline video slot from Playtech. Available to play on all devices, it comes with stacked walking wilds and a free spins feature where those stacked wilds are locked in place. Saddle up from between 20p and £2,000 per spin.

The setting for Heart of the Frontier is a classic wild west town – picture something from a classic western and you’ll get the picture. With a saloon and hotel in the background, the reels include A to 9 playing cards (actual cards rather than just numbers) and poker chips. They’re joined by a horse shoe and a sheriff’s badge.

A trio of gals are the higher value symbols – look out for the showgirl, the native American and lasso-toting cowgirl. The Heart of the Frontier logo is the standard wild – it replaces all other symbols apart from the sheriff and bandit wilds and offers payouts of up to 500 coins.

The female sheriff and bandit are both expanding wilds – whenever 1 of them lands, they will expand to fill the whole of that reel. On each subsequent spin, the stacked sheriff will move 1 reel to the right. The bandit moves in the opposite direction, shifting 1 reel to the left on each spin after she lands.

Once the free spins have finished, the bandit and sheriff will battle it out in an animated shootout. When the bullets stop flying, 1 stacked wild will remain. This will be locked in place for the first spin when you return to the base game.

The design in Heart of the Frontier is superb and the gameplay innovative – the number of free spins on offer may not be large and it’s not the easiest feature to trigger but the coins can quickly rack up if you manage to land stacked wilds on multiple reels. The base game offers plenty of potential courtesy of the stacked wilds too.

We’re not really massive fans of western movies so weren’t that excited at the prospect of Heart of the Frontier. We were pleasantly surprised though and certainly recommend a trip to this 1-horse town. If you like Wild West inspired games, there’s no better than Dead or Alive by Net Entertainment.