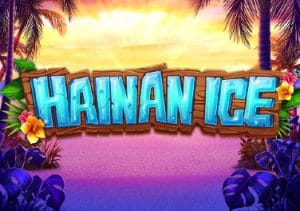 WHERE TO PLAY Hainan Ice SLOT

A tropical beach is the setting for Hainan Ice, a Chinese-themed slot from Playtech. It’s a 5 reel, 25 payline cascading reels slot where multipliers increase with each successive cascade win and can top 10x. There are also 5 different fruit-based feature rounds which offer respins with modifiers. Stakes here start at 25p per spin, rising to £500 per spin for those players with extremely deep pockets.

Head to the beach

It’s not often that we head to the beach in a Chinese-themed slot but that’s the setting in Hainan Ice. For the uninitiated, Hainan is a tropical province in southern China that’s home to some of the country’s finest beaches. On the reels you’ll see A to 10 royals as well as a selection of fruit symbols encased in ice cubes. The top standard symbol is the pineapple which pays 1, 2 or 8 times your bet if you land 3, 4 or 5 in combination.

Look out for 2×2 and 3×3 symbols which can combine to form Mega Blocks of matching symbols. The peach is the wild. This replaces everything as well as paying 8 times your bet if you land 5 in a row.

A cascading reels game mechanic, the Winning Cascades feature, is in play in Hainan Ice. After a winning combination lands, those symbols are removed and new ones drop in and replace them. These keep on coming as long as a new winner arrives. Each successive cascade win increases a multiplier from 1x to 2x, 3x, 5x, 7x and 10x. This resets to 1x after a losing cascade.

Land a winning combination made up of a Mega Block of 1 of the higher value fruit symbols and it’s collected in a meter. Once you have at least Mega Block 3 wins of 1 specific fruit, you’ll activate the associated feature. 1 respin is awarded for each collected fruit:

Slots with a Chinese theme usually have a strong historical feel or are full of bling. This holiday-themed slot offers something a little different. The beachside locale is nicely done and the variety of extras delivers plenty of range. If you fancy a virtual tropical getaway, then this is a decent enough place to escape to.

Variance wise, Hainan Ice is medium to high with maximum wins of 4,000 times your bet on every free spin with the potential 20x multiplier. If you like increasing multipliers, NetEnt’s Gonzo’s Quest was the first video slot to offer them.