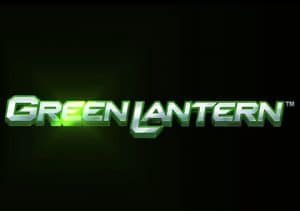 WHERE TO PLAY Green Lantern SLOT

Saving the earth from the clutches of the evil Parallax (as well as winning a jackpot or 4) is the goal in Green Lantern, a superhero-themed video slot from Playtech. Based on the 2011 movie starring Ryan Reynolds, it comes with a collapsing reels game engine and a trio of free spins features with stacked wild, added wilds and multipliers. You’ll also get a shot at 4 DC Super Heroes Jackpots. Play this 5 reel, 243 ways to win game, on all devices, from between 40p and £2,000 per spin.

Green Lantern aka test pilot Hal Jordan has been awarded a magical alien ring that has given him special powers. As far this video slot version goes, the powers come largely in the form of some special extras on offer in the 3 bonus features.

First though, we’ll look at the base game action. This centres on the Collapsing feature – after every winning spin, the successful symbols are removed and replaced by the ones directly above. A new calculation is made. If there’s another winner on show, you’ll get another collapse – these continue as long as there’s a new winning line created.

Symbols on show include A to 9 playing cards as well as a cast of characters from the movie. Look out for comic book versions of Guardian of Oa, Sinestro, Kilowog and Tomar-Re. The Green Lantern himself is the top paying symbol, offering 500 coins if you land 5 on successive reels. Rounding out the symbols is a wild – this can hit anywhere apart from reel 1 and replaces all other symbols.

Every Collapsing reel win will light up a segment of the Power Block meter which can be found in the bottom right hand corner of the reels. Rather than landing scatters, the features here are triggered by landing at least 4 Collapsing Reel wins in succession. The more wins in a row you manage, the better the extras on offer during the features – these are called Charges. There are 3 free spin features in all:

As part of the DC Super Heroes Jackpot network, you’ll also have a chance at winning 1 of 4 progressive jackpot payouts. This feature is triggered at random. Then pick from the matrix and find matching symbols. You’ll then win 1 of the Mini, Minor, Major or Grand jackpot. Land the biggie and you will win over £200,000 guaranteed.

The 2011 movie incarnation of the Green Lantern was an underwhelming affair. There’s plenty more to like in this video slot version. The design is as high end as you’d hope from a movie themed game from Playtech.

There’s plenty of action on offer too – the Collapsing Reels keep the base game ticking over nicely. The best opportunities come in the free spins though. Get on a run with the wilds and multipliers and the Green Lantern can offer some highly entertaining play. If you like branded content, Playtech offers you more than any other software provider.