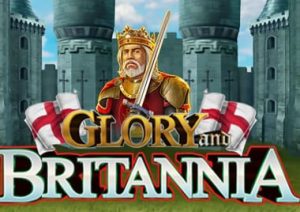 WHERE TO PLAY Glory and Britannia SLOT

It might sound like a Nigel Farage Brexit fantasy but Glory and Britannia is in fact a historical-themed video slot from Playtech. Played using a 5 reel, 243 ways to win game engine, it comes with a free spins round that’s played on an expanded 1,024 ways to win reel set. Activate the 7 figures from English history to bring plenty of extra goodies into play. Stakes range from between 30p and £300 per spin.

Like most Playtech games, there’s little cause to grumble about the design of Glory and Britannia. The reels are set within a mediaeval castle and include A to 9 playing card values alongside ornate books, rings, crowns and goblets. The lion rampant on the red shield is the best payer, awarding the best part of 17 times your bet if you land 5 on adjacent reels.

The golden cross is the wild. It can hit on reels 2, 3 and 4 only. The St George’s Cross is the scatter. Land 3, 4 or 5 of these on the same spin and you’ll pocket an award equal to 2, 5 or 20 times your bet as well as triggering the Free Spins feature where you begin with 15 free spins. An extra row is added here, taking the number of ways to win up to 1,024.

Above the reels you’ll see 7 different figures from English history. Each of them can award a special mini feature at random if they are activated. Click in the Shop icon to turn any or all of them alive. This will set you back a little extra per spin. With all 7 in play, the minimum bet rises from 30p up to £1 per spin. All the features can go live randomly. Here’s what your added investment could potentially get you.

Glory and Britannia is a surprisingly entertaining video slot. Granted, it probably won’t have much appeal north of the border or across the Irish Sea. If you have the funds, we’d certainly recommend activating the extra side features. It certainly peps up the action, especially during the Free Spins feature.

I particular like Merlin, King Arthur and the Duke of York as 20 more free spins, up to 3 wild reels and a multiplier up to 5x is appealing. This can result in payouts of 2,500 times your bet on every free spin! The theme won’t be for everyone. If you enjoy the historical slant and plenty of variety, then Glory and Britannia is well worth a spin. If you want a medieval game with 1 bonus feature that is highly volatile, WMS’ Black Knight II can’t be beaten.