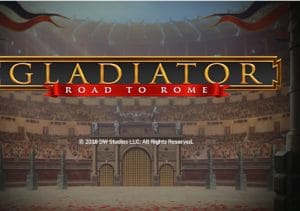 WHERE TO PLAY Gladiator Road to Rome SLOT

Join the mightiest warriors of the ancient world in Gladiator Road to Rome. Based on the Oscar-winning 2000 film, it’s a 5 reel, 25 payline video slot from Playtech. The free spins round comes with a host of modifier extras including added wilds, multipliers, nudging wilds and scatter pays. There’s also a chance to win a progressive jackpot prize via the Gladiator Bonus feature. Play on all devices from between 25p and £125 per spin.

The first incarnation of this video slot first hit the virtual shelves in 2008 – 10 years later, the design has stood up surprisingly well. It’s not as flashy as some recent arrivals but is more than serviceable. The Colosseum crowd forms the backdrop to the action here. The reels are made up of lower value playing cards and a range of characters from the film. The best of these is Emperor Commodus played by Joaquin Phoenix. Find 5 of these on a payline and you’ll pocket 20 times bet reward.

Keep a special eye out for the gladiator symbol – land 5 of these in combination and you’ll receive a payout of 40 times your total bet. Land a gladiator symbol full stacked and it turns into a stacked wild. Gladiator Road to Rome comes with 2 features.

Colosseum Bonus feature – land 3 weapon scatters and you will receive 5 free spins. You’ll then be shown 4 columns of shields. Pick 3 of them to reveal a modifier extra which will be applied to your free spins. On offer are:

After you’ve made your picks, the free spins begin, complete with your extras. If you were to reveal 3 multipliers, you could play with a 9x multiplier. You could also get the wild boosted by a 5x multiplier (5x payout boosts) which can lead to huge wins if you’re lucky. In terms of free spins, you could end up with 21 in total.

Gladiator Bonus feature – the second feature round is triggered by landing 3 of the helmet scatters symbols on the same spin. 9 helmets will then change colour to reveal bronze, silver or gold prizes. If all 9 turn gold, then you’ll win the progressive jackpot prize.

Just like the film on which it is based, Gladiator Road to Rome will stand the test of time. The Gladiator Bonus feature is especially impressive thanks to the wide range of modifiers on offer. You can expect something different every time you trigger the round. As far as volatility goes, we’d put it in the medium to high range.

The design stands up too. It’s not as glossy as some similarly themed video slots but works well enough, as does the epic orchestral score. If you like video slots based on movies, there are plenty to play with NetEnt’s Planet of the Apes and Playtech’s Top Gun 2 of the better ones.