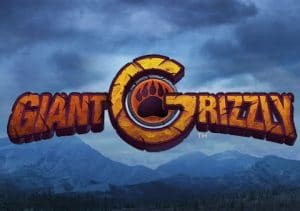 WHERE TO PLAY Giant Grizzly SLOT

Playtech invites players to enjoy a wild, wilderness adventure in Giant Grizzly. The big bears here can deliver big results thanks to expanding wilds, action wilds that collect instant win and a free spins round played on cascading reels where the wild extras are active. With 5 reels and 432 ways to win, each spin will set you back between 10p and £500 per spin (on all devices of course).

The sound and visuals in Giant Grizzly are very nicely done. The reels are set against a woodland backdrop that includes a totem pole and a log cabin. Those reels are set up in 4x3x3x3x4 row formation which combine to offer 432 ways to win. Joining the lower value A to 10 symbols are a collection of berries, mushrooms and wild animals. The best of them is the moose. Land 3, 4 or 5 of these on adjoining reels on the same spin and you’ll pocket an award of 2.5, 10 or 25 times your bet.

Wilds are central to much of the best action in Giant Grizzly. You’ll see that the middle 3 reels can be highlighted. Land an Expanding Grizzly wild behind a highlighted reel and the whole reel turns wild. Land wilds on adjacent highlighted reels and you’ll trigger a bigger expansion. These wilds can become 1×3, 2×2, 2×3 or 3×3 in size which can deliver some big rewards.

Some standard symbols have cash values attached to them. If an Action Wild appears behind a highlighted reel, you’ll scoop the attached cash prizes.

Landing 3, 4 or 5 of the paw print scatter will get you 5, 10 or 15 free spins in the grizzly Free Games feature. These are played out on a new set of cascading reels. Winning symbols are removed and new ones drop in to replace them to give you another opportunity to land a winner. The cascades keep on coming until there’s one where no new winner hits.

You won’t see Expanding or Grizzly Wilds during the free spins. Instead, they’re replaced by Rampage Wilds. These deliver the extras on offer from the 2 base game wilds when they appear on highlighted reels. Land 3 or more scatters results in a retrigger – you can do this 3 times for a potential 60 free spins altogether.

Giant Grizzly: Grizzly for the bankroll?

The gameplay in Giant Grizzly is a little unusual thanks largely to the highlighted middle reels. The wild extras can deliver some good results when they do hit. We found that to be rather few and far between, even during the free games. You can win 10,800 times your bet on every spin/free spin though.

We’ve no complaints about the sound and visuals though which are terrific. If you’re idea of sampling the great outdoors involves a big TV and David Attenborough, then Giant Grizzly might be the video slot for you. If you want volatile bears, Blueprint Gaming’s Grizzly Gold would be another game to try.