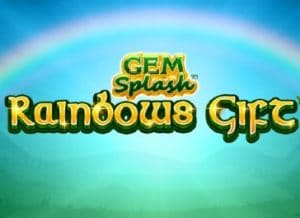 Playtech is the latest developer to send slots players on a quest for an elusive pot of gold in the Gem Splash: Rainbows Gift slot. This slice of blarney is played using a 5 reel, 30 payline machine but that can expand to 50 paylines during the feature round. In our Gem Splash: Rainbows Gift review, you’ll find out about special Gem Drop symbols that can deliver instant bonuses worth up to 100 x your total bet. Trigger the Free Games feature and you’ll get free spins on reels that expand every second free spin. Look out too for colossal 2×2 symbols which boost your chances of landing a Gem Drop bonus. You’ll also have a shot at landing 1 of 3 potential progressive jackpots. Let’s see what else the lucky leprechaun has in store.

Gem Splash: Rainbows Gift Theme – is there a pot of gold at the end of this rainbow? Playtech has kept things simple as far as the design of the Gem Splash: Rainbows Gift slot is concerned. With an Irish luck theme, you’ll see the obligatory blue skies and rainbow in the background. It has the look and sound and a classic live casino slot. It’s not the most sophisticated game you’ll play but you don’t really expect that from a slot where a grinning leprechaun is the star.

The green, Celtic-style reels include lower value A to J royals as well as higher paying symbols that relate to the Irish fortune theme. They include a pipe, a harp and a horseshoe. The smiling leprechaun holding a gemstone tops the bill as far as payouts go. Land 3, 4 or 5 across a payline for an award of 0.8, 3 or 6 x your total bet.

Playtech has created a Gem Splash: Rainbows Gift mobile slot. It offers the same simple blend of design and features that are found in the standard desktop version.

The Gem Splash: Rainbows Gift slot comes with 5 reels, 4 rows and 30 fixed paylines. A win is created by getting 3 to 5 matching symbols on a payline, starting from reel 1 and on successive reels.

It is available to players of all bankrolls. Stakes range from between 10p and an eye-watering £500 per spin. If you want to sit back and let the machine take control, activate the autoplay option which allows you to run between 5 and 100 autospins or leave them running until the feature hits.

Most slots where a leprechaun stars are relatively simple as far as gameplay is concerned. That’s mostly true here but there are a couple of extras that make this slot a little different. The Gem Splash feature can deliver some tasty bonuses in both the base game and the free spins round.

On any spin you could see the green Gem Splash symbol appear anywhere on the reels. Land a purple Gem Drop symbol directly on top of the Gem Splash and you’ll win the attached cash prize. These are worth up to 100 x your total bet.

The Gem Drop symbol drops down the reels one place at a time until if falls off the bottom of the reels. This means you have multiple chances to land a Gem Splash bonus. If a Gem Drop has been awarded, its value rises for the following spin. You could see Gem Splash and Gem Drop symbols land on more than 1 position on the same spin which means multiple prizes. Land 3, 4 or 5 pot of gold scatters symbols on the same spin and you’ll pocket an award of 1, 10 or 50x your total stake. You’ll also activate the Free Games feature.

Your initial reward is 8 free spins. There are a couple of extras in play here to help your winning chances. As well as standard sized symbols, the Gem Drops can appear as 2×2 blocks. The bonuses during the feature range from between 2 and 100 x your total bet.

On the 2nd, 4th and 6th free spin, 1 extra row is added to the bottom of the grid. This brings more paylines into play too:

Land 3 or more scatters on the same spin and you’ll add 8 more free spins to your total. You can win unlimited extra free spins if you’re lucky.

In the jackpot round, you could win a consolation cash prize of between 10 and 100 x your bet or the Minor, Major or Grand Jackpot.

This ticks many of the boxes for a leprechaun-themed slot. There are a few tweaks to the gameplay that make it a little more imaginative than you might expect though.

The Gem Drop bonuses add another layer to the gameplay and the expanding reels liven up what could have been a rather staid Free Games feature. Add the progressive jackpots into the mix and the Gem Splash: Rainbows Gift slot is a playable take on an old favourite theme.

The max win is quite low and makes the Gem Splash: Marilyn Monroe slot (also by Playtech) more appealing as you can win 2,000 x bet per spin. If it’s jackpots you’re after, Playtech has better alternatives like the ever-popular Age of the Gods slot.

What is the Gem Splash: Rainbows Gift RTP + max win?

The Gem Splash: Rainbows Gift return to player rate is 96.46% which is above average. Low to medium variance, the most you can win from a single spin here is just over 480 x your total bet.

You’ll have a shot at landing 1 of 3 jackpot prizes here. The Gem Splash Jackpot feature strikes randomly. You’ll then win a cash prize of up to 100 x bet or you’ll be celebrating with a Minor, Major or Grand Jackpot prize.

What is a Gem Splash?

The Gem Splash feature element awards instant bonus prizes of up to 100 x your total bet. You’ll trigger them by landing a Gem Drop symbol on top of a Gem Splash. Each Gem Drop symbol falls 1 position on each spin after it lands until it drops of the reels.

Is there a Gem Splash: Rainbows Gift free spins round?

Trigger the Free Games feature and you’ll receive 8 free spins. After the 2nd, 4th and 6th free spins, 1 extra row is added to the grid, taking the paylines up to 50 for the final 2 free spins. Look out too for 2×2 Gem Drop symbols which are added during the free spins.