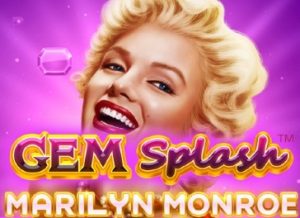 The Gem Splash: Marilyn Monroe slot is a jackpot game powered by Playtech. Based on the Hollywood icon, it’s a 5 reel, 30 payline title that combines classy design with some very playable extras. They include Gem Drop bonuses which can award instant win prizes of up to 100 x your bet. Trigger the free spins round and you’ll see colossal Gem Drop symbols which can reach 4×4 in size. There’s also a shot at landing 1 of 3 jackpot prizes. Discover all you need to know in our detailed Gem Splash: Marilyn Monroe review.

The set up in the Gem Splash: Marilyn Monroe slot is nice and simple. The action takes place on a 5 reel, 4 row machine that offers 30 paylines. Create a winner in the standard manner by landing 3, 4 or 5 matching symbols in a payline, starting from reel the leftmost reel.

Gem Splash: Marilyn Monroe is available for players at all bankroll levels from microstakes right up to high roller. Stakes range from between 10p and £500 per spin. Playtech’s standard autoplay options are available here. You can set between 5 or 100 autospins or run them until you trigger the bonus round. There’s a turbo mode option too. You’d expect a slot based on one of the most glamorous figures in Hollywood history to be a classy looking one and the Gem Splash: Marilyn Monroe slot doesn’t disappoint on that score. It’s of course based on Marilyn Monroe who was an model, actress and singer and was one of the most popular sex symbols of the 50s and 60s. Since her death in 1962, she’s come a major pop culture icon.

The design in the slot game is simple and rather elegant with shades of pink and purple dominant. Accompanying the action is a retro, brass-heavy backing track. It combines with the visuals nicely to create just the right atmosphere.

On the reels you’ll see art deco style royal symbols alongside a red rose, a microphone and a gemstone. Marilyn is the best symbol, delivering payouts of 0.8, 3 or 6 x your total bet if you manage to land 3, 4 or 5 on a payline.

There are some impressive jewel-inspired features on offer in Gem Splash: Marilyn Monroe. Gem Drops can deliver instant wins worth up to 100x in both the base game and the free spins feature. There are also 3 potential progressive jackpot prizes up for grabs.

On any spin you could see a purple Gem Drop jewel symbol appear. These come with a cash value of between 1 and 100 x your total bet attached.

To activate those cash prizes, you’ll need to land a Gem Drop symbol, overlaid on top of a Gem Splash symbol. Gem Drop symbols drop down the reels, one position at a time until they fall off the bottom of the screen. The Free Games feature is triggered by landing 3, 4 or 5 of Marilyn’s bright led lip symbols on the same spin. After an award of 1, 10 or 50 x your bet, you’ll go on to play 6 free spins.

The Gem Splash feature is active during the free spins round. You have a better chance of landing them as the Gem Drop symbols can appear in 2×2, 3×3 or even 4×4 blocks. The bonuses pay between 2 and 100 x bet. Each time a Gem Drop symbols drops down a row, its prize increases.

Hope to see 3 or more scatters land as this delivers a retrigger, adding 6 more free spins to your total.

Gem Splash: Marilyn Monroe also offers a shot at landing a progressive jackpot prize. The Gem Splash Jackpot feature can trigger randomly on any spin. You’ll then see a large gemstone. This moves around the screen until it awards one of the following cash or jackpot prizes:

The size of the jackpots is on display in the meters above the reels.

Playtech has kept things relatively straightforward in the Gem Splash: Marilyn Monroe slot. There’s a classy feel to the sound and visuals which combine very nicely.

The gameplay isn’t massively complex either. The Gem Drops can deliver some very decent action, especially in the Free Games feature when the oversized symbols come into play. Add the progressive jackpots into the mix and in Gem Splash: Marilyn Monroe you have a playable slice of Hollywood glamour.

If you want progressive jackpot slots, NetEnt’s Hall of Gods and Playtech’s Jackpot Giant are worth trying your luck at.

What is the Gem Splash: Marilyn Monroe RTP?

The Gem Splash: Marilyn Monroe return to player rate is slightly above average at 96.47%. This includes the contribution to the progressive jackpot elements of the prize pool.

You’ll have a shot landing 3 potential progressive jackpot prizes in Gem Splash: Marilyn Monroe. The Gem Splash Jackpot feature triggers at random. You could win a cash prize of up to 100 x bet or the Minor, major or Grand Jackpot where the potential megabucks are up for grabs.

What is the Gem Splash feature?

Hope to see a Gem Drop jewel symbol land on top of a Gem Splash logo symbol as you’ll pocket an award of up to 100 x bet. These can trigger in both the base game and the Free Games feature where they can appear up to 4×4 in size.

Is there a Gem Splash: Marilyn Monroe mobile slot?

Yes, Playtech has made the Gem Splash: Marilyn Monroe slot available to play on mobile, tablet and desktop devices. You’ll find the same blend of elegant visuals, brassy sound and top features on offer in the desktop version of the slot.