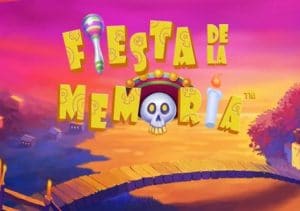 Take a virtual trip to Mexico in Fiesta de la Memoria, a 5 reel, 20 payline video slot from Playtech. Based on the Day of the Dead festival, it’s a feature heavy game that comes with a bonus wheel, a pick me round and free spins. Play on all devices from between 20p and £500 per spin.

A Latin American street is the setting for this bright and colourful game. The reels are dominated by a selection of 6 cartoon skeletons – you’ll see farmers, chefs, singers, waitresses and sheriffs alongside the top paying bandito. Sporting a superb moustache, he offers awards of up to 250 coins per payline.

The most lucrative symbol is the wild. As well as replacing everything apart from the scatter, bonus and free games symbols it also offers awards of 2, 60, 200 or 500 coins for a 2, 3, 4 or 5-symbol combo.  A trio of bonus features are on offer in Fiesta de la Memoria:

Mariachi feature – you’ll need to land 3 or more of the scatter (the circus big top) to trigger this multiplier wheel. Depending on where the pointer lands, you’ll get a multiplier that is applied to your total bet. Land 4 or 5 scatters on the triggering spin and the multipliers on offer on the wheel increase – up to a whopping 250 times your total bet!

Altar Bonus feature – land 3 or more bonus symbols to trigger this pick me round. Choose from the altars to reveal cash bonuses. Keep picking until you land a collect. There are 6 stages to this feature with increasing prizes the further you progress. Complete all 6 stages and you’ll land an extra bonus prize. The more bonus symbols on the triggering spin, the bigger the pick’em prizes on offer.

Festival Free Games feature – 12 free spins are awarded if you land the Free Games symbol on the middle 3 reels on the same spin. Added to the mix here are a trio of special skull symbols which pay 1, 2 or 5 times your total stake whenever they appear.

We managed to land the features at fairly regular intervals – we’d put the variance in the middle. The bright imagery works very well here and the mariachi style soundtrack is very nicely done. Fiesta de la Memoria doesn’t quite have the wow factor of the similarly themed Esqueleto Explosivo by Thunderkick but still delivers plenty of action and entertainment and is certainly worth a spin.