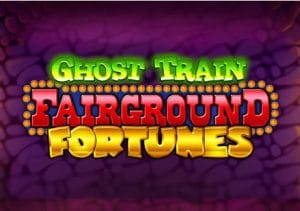 Fairground Fortunes: Ghost Train is a 5 reel, 20 payline video slot from Playtech. Taking a trip on this spooky loco can deliver rich rewards courtesy of a cash trail bonus and a free spins round that’s played on a 50 payline reel set with added stacked wilds. All aboard from between 20p and £20 per spin.

The visuals in Fairground Fortunes: Ghost Train have a light-hearted feel – there’s just a hint of horror though to spice things up a little. Joining the lower value A to 10 playing cards are a bouncy castle, a demonic dodgem and a ghost. The latter 3 symbols all award payouts of up to 20 times your total bet.

The best paying symbol is the coconut which is the scatter – land 2, 3, 4 or 5 of these anywhere on the reels on the same spin will get you 2, 5, 20 or 100 times your total bet. Perched to the right of the reels is an animated coconut dressed up like a vampire or Frankenstein’s monster.

This coconut can randomly morph into a baseball player (yes, really) and chuck a ball at random symbols on the reels. These symbols will then transform into scatters and a new payout calculation is made. There are 2 bonus rounds on offer at this spooky fairground:

Ghost Train feature – this round is activated by landing the Ghost Train symbol on the middle 3 reels on the same spin. A train then rides along a track and collects cash bonuses whenever it stops. When you reach the end of the trail, you’ll be offered a pair of tickets – 1 is a game over, the other a ride again which gives another trip along the track. These continue until you land a game over ticket. If you trigger the round with 2 standard symbols plus 1 gold ghost train symbol, you’ll get at least 3 rides along the track.

Free Spins feature – land the bat symbols on reels 1, 3 and 5 and you’ll be awarded 10 free spins. These are played on a new set of reels which feature 50 rather than the standard 20 paylines. Wilds appear in stacks that are 5 symbols high during the feature. Re-triggers are possible too if the bats fly into view in the right places – there’s an unlimited amount of free spins to be won too!

Combining high-end sound and visuals with some entertaining features, Fairground Fortunes: Ghost Train is an impressive overall package. We enjoyed some good success riding the Ghost Train, pocketing 100 times our stake during the cash trail. The free spins were harder to come by but deliver when we did find them. We’d put the variance here in the medium range.

It’s not a particularly scary video slot but for some chilly cartoon japes, a ride on this Ghost Train is certainly worth making. I also recommend you try your luck at other fairground attractions with NetEnt’s Theme Park: Tickets of Fortune.