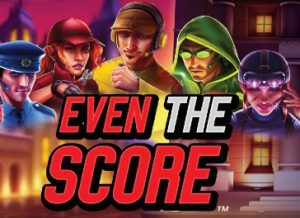 Even the Score: Demo

WHERE TO PLAY Even the Score SLOT

Try and pull off the perfect bank job in the Even the Score slot, a crime caper-themed game from Playtech. Helping you to try and do that is a team of 5 master criminals, each of whom awards free spins complete with modifiers that include expanded reels, multipliers of up to 10x and randomly added wilds. You can land multiple modifiers during the same set of free spins which can lead to some potentially spectacular combinations and up to 10,000 x bet wins. See what else is hiding in this bank vault in our in-depth Even the Score review.

Even the Score Slot RTP & Info

The Even the Score slot game has 5 reels and between 20 and 1,024 ways to win. Initially, you begin the game with 20 paylines. In all possibilities, a win is formed when matching symbols landing on successive reels from left to right and beginning from reel 1.

Even The Score is played at stakes of between 10p and £500 per spin. You can set up to 100 autospins if required or leave then running indefinitely (we wouldn’t recommend this). There’s also a turbo mode available if required.

The Even the Score RTP is 96.12% which puts it somewhere in the middle of the pack as far as RTP rates are concerned. It’s a high variance slot though with the bigger wins coming from the multipliers. The max win is 10,000 x bet per free spin which is high.

Even the Score Theme – try and execute the perfect bank heist Even the Score is a slot that’s packed full of atmosphere. It has a bank heist theme as the criminals aim to recapture the goods stolen from them.

Set against a night time backdrop of city streets, you’ll find lower value A to J symbols on the reels alongside a selection of symbols relating to a bank heist. These include keys, a padlock, coins and bars of silver and gold bars.

The diamond is the top symbol, paying 0.9, 2.5 or 25 x your total bet if you land 3, 4 or 5 in combination. There’s also a wild, the door to a bank vault. This replaces all the standard symbols in a winning combination.

Ramping up the tension is a cracking backing track which could come straight out of a Hollywood heist movie. The atmospheric design fund in the PC version is present and correct in the Even the Score mobile slot. You’ll find the same collection of features too which deliver plenty of exciting gameplay.

Even the Score Bonus features The best opportunities in the Even the Score slot come from the free spins. You can trigger these whenever a member of the crime crew makes an appearance on the reels. Each member of the team awards free spins, complete with their own special modifier. Here’s what they’ll offer: The single features are fine as they go. It’s when you land multiple members of the team on the same spin that things can get much more interesting. When this happens, each symbol’s modifier is live.

For example, land the Safe Cracker, the Gymnast and the Demolitionist on the same spin and you’d receive up to 10 free spins from the Hacker plus another 2 free spins courtesy of the Safe Cracker and the Hacker. These free spins would be played on a 243 ways to win machine and come with added wilds on the middle 3 reels on each of them.

In the happy circumstance that you land all 5 members of the gang on the same spin, you’ll receive a combo set of free spins complete with all the modifiers. That means:

In total, there are 26 different combinations to benefit from.

At first glance, the Even the Score slot looks like quite complicated. There are 26 different feature combinations after all. First impressions can be quite deceptive though. Yes, there’s plenty of feature variety on offer her but it’s all very straightforward and easy to play. The features also trigger frequently.

The free spins offer plenty of potential, especially if you manage to land multiple members of the gang on the same spin and bag a combo package of modifiers. The bigger wins will come from the multipliers (up to 10x) and the expanded reel set of 1,024 ways to win.

Design-wise, it’s very nicely put together. If your idea of a top movie is something like Ocean’s 11, Baby Driver or The Town (an underrated gem), then Even the Score could be the slot for you. If you like the thrill of the chase, the Hotline 2 slot game by NetEnt will also do nicely.

Even the Score FAQs

What is the Even the Score RTP + max win?

The Even the Score RTP is 96.12% which is about average for a slot rate of return. More impressive is the win potential as the top payout is 10,000 x bet per free spin. This will come from the multipliers which can reach 10x.

What are the Even the Score features?

Free spins with plenty of modifiers top the bill when it comes to the Even the Score features. These include expanded reels, multipliers of up to 10x and added wilds. You can land multiple modifiers on the same spin which can create some big opportunities.

Is there an Even the Score mobile slot?

Yes, Playtech has created an Even the Score mobile slot. It can be played on desktop, tablet and smartphone devices. You’ll find the same blend of atmospheric design and feature-filled gameplay that’s on offer in the PC version.

Which developer has created Even the Score?

Even the Score is a Playtech slot. You’ll find the developer’s usual impressive sound and visuals as well as some exciting features in this virtual crime caper. It’s available to play at Playtech casinos.