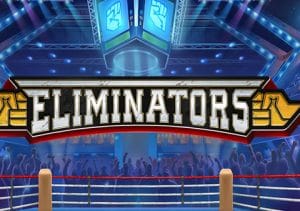 WHERE TO PLAY Eliminators SLOT

Join a bunch of brawling bruisers in the cage fighting ring in Eliminators. Created by Playtech, it’s a 5 reel, 20 payline, collapsing reels video slot that comes with 2 free spin bonus rounds that offer up to 50 free spins (initially) with multipliers that can end payouts rocketing by up to 10x. Stakes range from 20p to £500 per spin.

The design here could come straight from a comic book – the setting is a cage fighting ring, roared on by a raucous crowd. The lower value symbols are red, blue and green boxing gloves. The fighters are more rewarding – they include boxers, wrestlers and martial artists. The old master with the flowing white beard is the most lucrative – land 5 of these in combination and you’ll 125 times your bet. Appearing on the middle 3 reels only is the wild – it substitutes for all other symbols apart from the scatter.

After you land a successful combination, the winning symbols explode and are removed from play. New symbols drop in and replace them. These collapses continue until there one where no new winning combination is landed.  This is known as the Collapsing Reels feature.

If you land a winning combination made up of 1 of the fighter symbols, then they are eliminated from future collapses from that spin. After a winless collapse, all eliminated symbols return. If you eliminate all 5 fighters, you’ll activate the Elimination feature where a prize of up to 40 times your bet is awarded.

It’s all about the 2 free spins features which can be accessed by landing 2 or more scatters on the same spin. You’ll then be offered the pick of 2 free spin features:

Red Free Games feature – opt for this one and you’ll be awarded 3, 12, 25 or 50 free spins. Each successive collapsing reels win increases a multiplier. Get on a roll here and you could see multipliers of up to 10x. Retriggers are possible here too. This is a high variance option.

Blue Free Games feature – pick this medium variance round and you’ll receive 3, 12, 25 or 40 free spins. There aren’t any multipliers in play but you can expect to land winners more regularly than the Red Free Games feature. As above, you can retrigger more free spins infinitely.

This fight-themed slot game is an enjoyable one. The cartoon graphics are nicely done and there’s plenty of action from the collapsing reels game engine. Trigger the bonus round for even more opportunities. We’d opt for the very volatile Red Free Games feature due to the potential 10x multiplier. You could whiff completely but get on a roll with the multipliers and Eliminators can deliver some potentially knockout action. If you like the theme, Thunderkick’s Luchadora is worth trying.