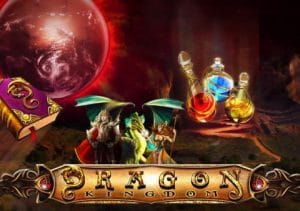 WHERE TO PLAY Dragon Kingdom SLOT

Myth, magic and fire-breathing creatures take centre stage in Dragon Kingdom, a 5 reel 20 payline video slot from Playtech. This fantasy-themed game comes with special split symbols that can create 6 symbol winning combinations as well as a free spins feature where multipliers can reach up to 5x. Play from between 20p and £40 per spin.

The reels in Dragon Kingdom have a fantastical feel – the flame-edged playing cards values are joined by amulets, books of spells, bottles of potion as well as male and female warriors. The mighty dragon is the game’s wild, replacing all other symbols apart from the scatter. Land 6 of these on a payline for a massive payout of 25,000 times your line bet.

A 6 symbol combination you say? How does that work in a 5-reel video slot? The purple egg is the split symbol – when it lands on reel 5, the last symbol in a winning combo will be divided in 2 and count as 2 identical symbols, making it possible to land 6 on a payline. Every symbol apart from the scatter can split – that includes the wild.

The mysterious sky city is the scatter – land 3 of these anywhere on the reels and you’ll receive 15 free spins complete with a dynamic multiplier. The free spins will start with a randomly chosen multiplier of 2x, 3x, 4x or 5x. After every winning spin, the multiplier will increase by 1, up to a maximum of 5x. An unsuccessful spin sees the multiplier drop by 1 – it can’t dip below 2x though.

There is plenty of great action on offer in Dragon Kingdom, especially in the free spins where the extra wilds, dynamic multiplier and split symbols can combine to great effect. On the variance scale, we’d place this in the medium range.

Well-designed and brimming with features, Dragon Kingdom is a very easy play. If you’re after some Game of Thrones style fantasy (without the sex and gore) then it’s well worth flying into this dragon adventure. You could also try the official Game of Thrones video slot from Microgaming if you like too.