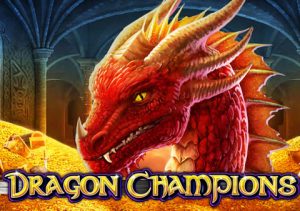 WHERE TO PLAY Dragon Champions SLOT

Join a band of medieval warriors on a quest for treasure in Dragon Champions. Created by Playtech, it’s a volatile, 5 reel, 4,096 games to win video slot. Look out for special Dragonfire symbols that can expand in 4 directions as well as a bonus feature where you can win up to 100 free spins initially with unlimited free spins thereafter. Stakes range from between 40p and £80 per spin.

The design in this fantasy adventure is simple but nicely done – a treasury fully of coins and gold forms the backdrop to the plain purple reels. Joining the lower value A to 10 playing cards are a female archer, an armour-plated magician and male and female warriors. The best of the symbols is the red dragon – land 6 of these on adjacent reels and you’ll pocket a 400-coin awards. There’s also a wild that can land on all 6 reels and substitute for everything bar the scatter.

Dragon Champions comes with a pair of extra features. Hitting far more regularly of the 2 is the Dragonfire feature – any symbol (apart from the wild and scatter) can land covered in blue Dragonfire. That symbol will then expand 1 position up, down, left and right in a cross formation. A new payout is then made with the new symbols in position.

The second attraction is the Dragon Champions Free Games feature – to trigger it, you’ll need to land 3, 4, 5 or 6 scatters. In return, you’ll be awarded 8, 15, 20 or 100 free spins. The slight tweak to the feature concerns the Dragonfire feature.

During the free spins, the Dragonfire can only engulf the highest value red dragon symbol which will lead to much bigger wins. Look out for the scatters too – land 2 or more of them anywhere on the reels and you’ll get at least another 5 free spins. There’s an unlimited amount of free spins up for grabs here.

Playtech has kept things pretty simple in Dragon Champions and for the most part it works well. The design isn’t quite up to the super sharp, high def standards we see from the likes of ELK Studios and Yggdrasil Gaming but it’s still perfectly serviceable. The backing track has more than a hint of Game of Thrones to it, especially during the feature. The same can be said of the gameplay. There’s nothing too flashy as far as features go but it’s all solid enough.

Expect to hit the expanding Dragonfire symbols regularly -the free spins are more difficult to come by. We’d put the volatility on the high side so you need to be careful. Dragon Champions isn’t the most outlandish sword and sorcery video slot you’ll see. Simple works well here though.

If you enjoy the fantasy theme and volatile action it’s certainly one to consider. I also recommend you try WMS’ Raging Rhino which is similar as well as Yggdrasil Gaming’s Double Dragons if you like the theme.