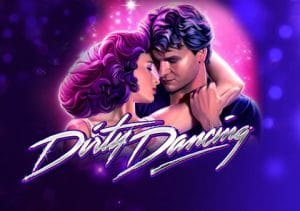 WHERE TO PLAY Dirty Dancing SLOT

Patrick Swayze and Jennifer Grey take centre stage in Dirty Dancing, a 5 reel, 40 payline video slot from Playtech. Based on the 1987 movie musical, it comes with plenty of extras including whirling wilds, free spins with added wilds and doubling multipliers and a pick me round that can lead to a progressive jackpot. Get dancing, on all devices, from between 40p and £1,000 per spin.

The movie may have been released in the late 80ss but it’s set in the early 1960s – that’s evident in the design of the game which features A to 10 playing cards, radios, jukebox vinyl, high heel shoes and a classic open top car. They’re joined by Penny (Cynthia Rhodes) and Baby (Jennifer Grey). Land 5 of the latter for a 500-coin boost.

Johnny aka Patrick Swayze is the game’s wild – he substitutes for all other symbols apart from the scatter and awards payouts of between 15 and 5,000 coins if you land between 2 and 5 on a single payline. Look out too for the Dirty Dancing logo which is the scatter – the cashier will ring to the tune of 5, 25 or 125 times your total stake if you manage to land 3, 4 or 5 of them anywhere on the reels on the same spin.

There are 3 bonus features on offer in Dirty Dancing, all of which are triggered at random:

The further you make it, the bigger the prizes on offer. They start at 4 times your stake in level one but can reach 20 times your stake by the time you reach level 5. Reach level 6 and you’ll have a chance to take down the progressive jackpot.

Time of My Life Jackpot Game feature – this is the sixth and final level of the Dirty Dancing Bonus feature. Find 3 of Johnny or 3 of Baby and you’ll win 1 of the 2 progressive jackpots on offer.

The glittery visuals are nicely realised and the soundtrack has a suitably retro flavour. The range of features is pretty impressive too. They hit at regular intervals so you should get plenty of bang for your buck. There are still chances to land a big score too with the overall variance in the medium range.

The version of Dirty Dancing won’t disappoint fans of the original movie. Even if you have 2 left feet, this video slot should be able to get you moving. If you like games based on famous films, Bally’s Titanic and Microgaming’s Jurassic Park are recommended.