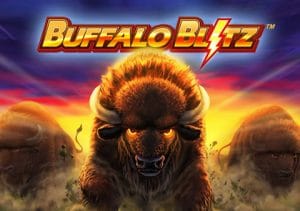 WHERE TO PLAY Buffalo Blitz SLOT

Head to the desolate grasslands of North America in Buffalo Blitz, a wild animal themed video slot powered by Playtech. Played using an unusual 6-reel game engine that offers a whopping 4,096 ways to win, it also comes with a bonus feature where up to 100 free spins are on offer with multipliers that can reach 5x. Play on your desktop, tablet or mobile device from between 40p and £200 per spin.

The visuals in Buffalo Blitz are pretty basic – set against a wilderness backdrop, the plain blue reels include lower value playing cards and a range of wild animal symbols. Look out for bears, elks, raccoons and big cats. The most rewarding symbol is the buffalo. It can appear as stacked on all 6 reels – land 6 in combination for a 300 coin payout.

It’s worth noting here that winning combinations are formed when the same symbol lands on successive reels. The jackpot may look a little skinny but the way the game engine is set up means you can win big on a single spin. There’s also a wild, the diamond, which can land anywhere apart from reel 1. It replaces all other symbols with the exception of the scatter.

Keep a special eye out for the diamond wild during the feature – whenever it forms part of a winning combination, it will boost it with a randomly allocated multiplier which will increase your payout by 2x, 3x or even 5x.

You can trigger even more free spins if the Free Spins symbols land during the feature. The numbers are the same as above apart from landing 2 Free Spins scatters which will get you an extra 5 free spins. There’s no limit to the amount of free spins you can win which is good.

We found the variance in Buffalo Blitz to be in the medium to high range – the free spins round wasn’t the easiest to trigger but did deliver some tidy rewards when it did hit. The 4,096 ways to win game engine offers plenty of base game opportunities too. We enjoyed some fine results in the base game with the stacked buffalo symbol as well.

Buffalo Blitz is fairly simple fare, both in terms of design and features – it’s playable enough though without offering anything revolutionary. Get lucky with the free spins and multipliers though and this wild animal adventure could still deliver a stampede of coins. It’s quite similar to WMS’ Raging Rhino which is a positive thing.