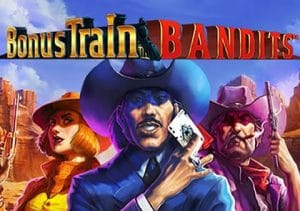 Join a band of outlaws in Bonus Train Bandits, a 5 reel, 20 payline video slot from Playtech. This Wild West adventure comes with plenty of extras including extra wilds, streak respins and a free spins round with expanding multipliers. Play on all devices from between 10p and £500 per spin.

The design in Bonus Train Bandits is very well done. The reels are set against a canyon backdrop. There you’ll find playing card suit symbols as well as TNT, animal skulls and pistols as well as 3 bandits. The best of them is the card player who awards 1.5, 5 or 15 times your bet if you land 3, 4 or 5 on a payline. There’s also a wild that substitutes for all the standard symbols. This also offers payouts of 2.5, 10 or 25 times your bet (for 3, 4 or 5 in combination).

Above the reels you’ll see a railroad and the Bonus Train that pulls a collection of carriages which each contain a feature. The Bonus Train carriages move 1 position to the left with each spin. When a scatter lands, you’ll trigger the feature in the carriage directly above. There are 4 of these.

Revolver Wilds feature – a volley of bullets are fired at the reels. They turn up to 6 symbol positions into wilds. A new payout calculation the follows with the wilds in place.

Super Spins feature – this is a variation on the streak respin bonus. 1 symbol is first randomly selected. You’ll then receive 2 spins with just that symbol and blanks on the reels. If your symbol lands, it sticks in place and the respins reset to 2. The round continues until you’re out of spins or you’ve filled the whole of the reels with the same symbol.

Mega Multiplier Free Games feature – land this round and you’re guaranteed to land 5 winning spins. Above the reels you’ll see multiplier carriages attached to the train. On each free spin, a bandit runs along the carriages, increasing the multiplier as he goes. If your free spin isn’t a winner, the number of free spins you have remains the same. The round finishes once you’ve had your 5th winning free spin.

Cash Prize feature – this awards an instant win of up to 100 times your bet.

We really liked Bonus Train Bandits. The visuals are well done and the spaghetti western style backing track is a perfect fit. It’s the features that really make the game though. The added wilds, streak respins and free spins with expanding multipliers are a top combination.

We managed to get the multiplier up to 20x in the Mega Multiplier Free Games feature which really got the coins flowing. There’s up to 500 times your bet to be won from each spin – add in a multiplier or 10x or even 40x and you could walk away with 5,000 or 20,000 times your bet (per free spin).

The Wild West theme isn’t usually a favourite of ours. Bonus Train Bandits works well though combining classy sound and visuals with some cracking gameplay to highly entertaining effect. If you want to join outlaws in the Wild West though, NetEnt’s Dead or Alive II cannot be beaten.